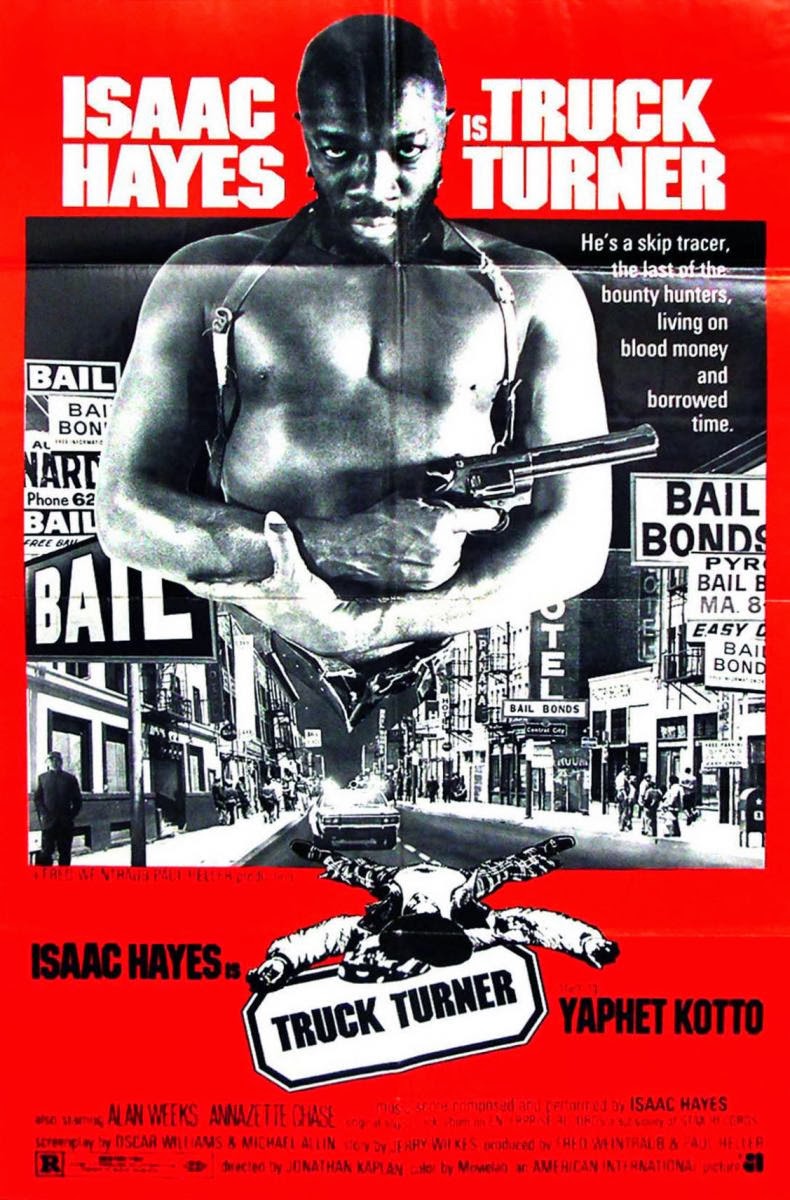 Ha ha, how ya doin’, it’s Burl! Yes, I’m here to review another picture, and this one is a fine blaction drama by the name of Truck Turner! It’s a real rootin’ tootin’ shoot-em-up, made with conviction and a heck of a cast!
After getting such acclaim for his musical work on Shaft, I guess Isaac Hayes thought “The heck is Richard Roundtree anyway with that jive-ass candybar name and that elegant turkey talk! Ha ha, why is it not I up on screen!” To which no one said “Fool, you cray!”
I think Isaac’s debut film worked out perfectly well! He plays Truck, by reputation the toughest football-player-turned-bail-bondsman in town! He has a real hullaballoo on his hands, running after a terrible pimp he’s been sent to catch by none other than Dick “The Long Ride Home” Miller, fighting some fools in a bar who end up with busted heads and broken jaws, road-racing to beat the band, and plenty of biffing and banging about! In the end he gets the pimp, but he has two all-new enemies: Harvard Blue, a pimp played by the great Yaphet Kotto, and a madame played by Uhura! (There are a few moments where you wonder “Ha ha, why was this woman not played by Pam Grier,” but they pass, and certainly Uhura – that is to say, Nichelle “The Supernaturals” Nichols – does a fine job in the role!
Anyway, there’s a lot more exploding squib action before, and during, the hospital-set climax and the poolside denouement! And it’s all managed very well by director Jonathan Kaplan, who made Over the Edge and of course Night Call Nurses! Ha ha, all sorts of other fine actors show up too, like Scatman “The Shining” Crothers, Sam “Get Crazy” Laws and of course Charles “The Fog” Cyphers as a miserable drunk! In the middle of all this thespian power stands Isaac Hayes, a man alone just doing his thing, and he does a marvelous job!
There are plenty of wonderful touches in the picture, both in the script and in the execution, and plenty of terrific action; and it’s altogether one of the finest photoplays in the entire Blaxploitation cycle! And on top of it all you get Dick Miller, which is always momentous! I don’t have a whole lot more to say about Truck Turner except that I give it three Fort Knoxes in panties, and urge you to see it post-haste! You’ll enjoy yourself, ha ha!
Posted by Burl at 14:36