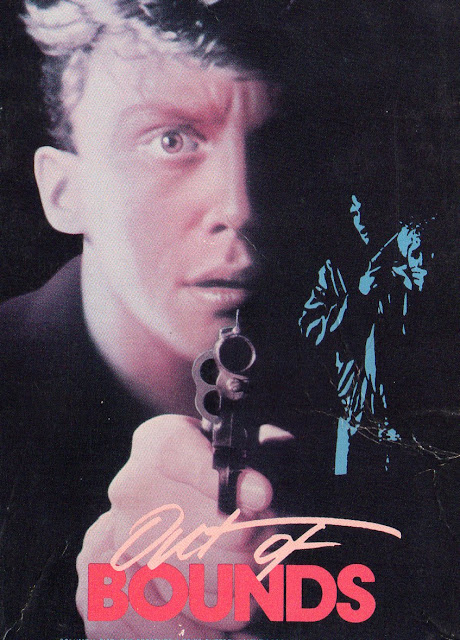 Hi, Burl here! Sorry to start this review on a sad note, but I was just watching this movie Out of Bounds, and got to thinking about the picture’s cinematographer, Bruce Surtees! He shot Beverly Hills Cop as well, and also some very good-looking movies like Dirty Harry and Big Wednesday! Anyway, I thought to myself “Ha ha, now there’s a talented guy,” and then a few days later I read that he up and died! Too bad!
Anyway, Out of Bounds is certainly one of his minor works, and that’s the picture I thought I’d review for you today! It’s a homburg picture, just like Blue City! That’s my term for the transitional movies in the careers of Brat Pack actors - in this case Anthony Michael Hall - who want to be Taken Seriously and not cast as high schoolers any more! But so often, as is the case with Blue City and, I’m afraid, with Out of Bounds as well, the movies are bad enough to put a real crimp in the actor’s career! (And this might have been the movie Anthony Michael Hall did instead of Full Metal Jacket, which is a pretty poor trade-off if you ask me!)
Still, Out of Bounds is better than Blue City, and better than distaff homburg pictures like Fresh Horses and For Keeps as well! It tells the story of Daryl, a corn-fed Iowa farmboy who travels to Los Angeles to stay with his football-hero brother! Unfortunately, a confusion at the airport results in Daryl walking off with a bag belonging to a murderous drug dealer, who, we’ll have to agree, was a bit of a dummy for flying to L.A. when he could have driven!
Once Daryl is set up in his new digs, an outbuilding behind his brother’s house that’s hidden behind a fake camouflage hedge for some reason, he finds “some kind of crazy stuff” in his bag! Next morning his brother and sister-in-law have been murderized, and Daryl’s on the run, with only a goofy gal named Dizz for company! Dizz is played by Jenny Wright from The Wild Life, and is that sort of crazy L.A. lady we see in all sorts of movies, from The Vals to L.A. Story! She works as a waitress at Barney’s Beanery, yet drives a fancy convertible car and lives in an over-decorated house that would be way beyond any waitress’s salary to own or even rent! Ha ha!
The cops, perhaps to demonstrate their total dedication to solving the crime, make incredibly detailed tape outlines of Daryl’s relatives and then immediately decide he must be the murderer! Under Dizz’s supervision, to the aluminum whine of The Smiths’ “How Soon Is Now,” Daryl undergoes an L.A. makeover, donning an all-new lifestyle outfit complete with fingerless leather gloves! Every action Daryl takes seems to dig him in ever-deepening poo with the police, and soon the cop on the case, played by Glynn Turman from Super 8, tells Daryl that he’s “gone way out of bounds!” Ha ha, oh for the days when a movie’s title would be awkwardly inserted into the dialogue!
Well, this forgotten picture is no classic, but it’s a fine artifact of the era! As a tour of 1980s Los Angeles, it rivals such players as Into the Night and Miracle Mile, and it even features a surprise appearance by Siouxsie Sioux, whom we find singing in a rock n’ roll club! Anthony Michael Hall’s performance is okay I guess, but Daryl is so reserved and taciturn that at times it seems like Rainman has been made the star of an action picture! Instead of counting toothpicks, his special talent is for throwing knives, which we see him do at the beginning of the picture! From there it’s just a matter of counting time until he bookends that by throwing a knife into the drug dealer too!
In memory of the talented Bruce Surtees, and for its marginal qualities rather than any fundamental merit, I give Out of Bounds two large penguin posters!
Posted by Burl at 14:26