Burl reviews A Nightmare on Elm Street: The Dream Child! (1989) 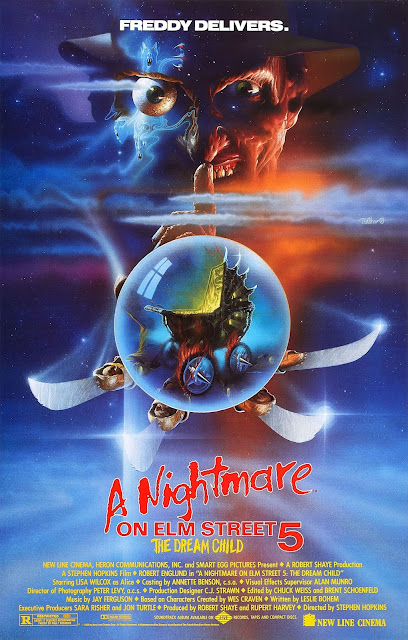 One, two, Burl’s coming for you! Ha ha, and by “you,” I mean Freddy Krueger of course, the laughing scarface in the stripèd sweater, the fellow who appeared in a few enjoyable pictures and then, having transformed into a jokester in a knife-glove, foisted upon the world such pictures as A Nightmare on Elm Street 4: The Dream Master! Ha ha, I didn’t like that one much, and I remembered its direct sequel, A Nightmare on Elm Street: Dream Child, as being even worse! Well, I watched that one again the other night, and you know what? It’s not worse!

It’s not a whole lot better either, but it is better, and, as with its two immediate predecessors, I saw it in the theatre with a gang of pals, so it’s possible the agreeability of that experience will bleed into my opinion of the picture! I’ll try to avoid that! What I will say is that Wes Craven never came within a mile of this film - ha ha, he was too busy making Shocker, which I guess was his attempt to make a new Freddy type of fellow! Luckily for all, I think, Horace Pinker didn’t make it!

Maybe you’re wondering why I’ve omitted the number 5 from the title - ha ha, well, that’s how they do it on the title card in the movie itself, and so that’s how I’ll say it too! I guess they were trying to downplay how far along in the series they were! In any case, this one is a direct continuation from number 4, with Lisa Wilcox from Gimme an ‘F’ once again styled as a forty year-old lady to play the character of Alice, yet another Elm Street kid who’s become the target of the fedora-topped dreamaniac!

Alice has a boyfriend called Handsome Dan, and pals like Yvonne, played by Kelly Jo Minter from Summer School; Mark, essayed by a pretty bad actor called Joe Seely from Armed and Dangerous; and Zandalee herself, pretty Erika Anderson, as Greta! Yvonne’s dad looks like an amiable oaf, but Mark, Greta, and Dan have parents who oppress them in one way or another, though this never comes to much either narratively or thematically! Alice herself has an AA dad played by Nicholas Mele from The Lonely Guy, and another parent (Dan’s, I think?) is played by Burr De Benning from Armed Response, but we never find out if these parents too were part of the original John Saxon mob that burned up Freddy back when he was just a creepy, handsy janitor!

Of course the dream murders are the engine that powers these vehicles, and again, for the most part, they just come off as little skits in which Freddy can perform homicidal charades in the guise of a chef or a surgeon or a motorcycle! One fellow turns into a cartoon or something, and finds a new definition of “paper cut,” ha ha! The idea is that Alice is pregnant and Freddy is somehow funneling himself through the dreams of the fetus and thereby able to pick off Alice’s friends! Ha ha, even internally, the logic is a mess - I mean, the fetus is not even a fetus, being only days old over the period of the story! It would be a little, undreaming clump of cells! Some of you evangelicals may disagree with me on that, but it’s true!

The movies try to be fun lite-horror, but I’ve always felt the more unsavory aspects of Freddy, like his repeated use of the word “bitch,” his origin story as the child of a gang-raped nun (an event dramatized in this movie, unfortunately), and of course his pre-conflagration career as a child molester, sit ill with his status as a comic-bookish anti-hero firing off catch phrases! But in the last act this picture suddenly decides to try harder and show off a little imagination! Ha ha, the dream world becomes an Escher-like maze of staircases unmoored to conventional planimetrics or everyday physics, and indeed reminiscent, unusually for this series, of an actual dream! Another noteworthy moment has fake heads on tendons popping out of Freddy’s back like riot balloons! Ha ha!

But most of the picture is saddled with poor dialogue, so-so acting, and rote dream sequences, so it’s no great glahoonick in the end - not a patch on the original A Nightmare on Elm Street, nor the enjoyable Dream Warriors! And every single special effect seems to have been done by a different artist or company, and that lends the thing a real patchwork quality! I wasn’t sorry I watched it, but nor was I transported back to August 31, 1989, when I saw it at the downtown mall multiplex! I give A Nightmare on Elm Street: The Dream Child one and a half ugly baby carriages!