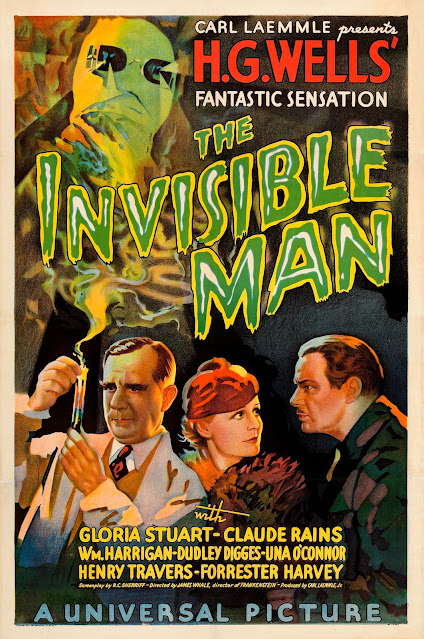 Mwa-ha-ha-ha and hello, it’s Burl! Am I here? Or am I over here! Ha ha, there’s no way of knowing, for I am completely invisible to you! Yes gumchewers, I’m here to review a classic of the cinema, the Universal Pictures production of The Invisible Man, directed by that giant mammal of cinema James Whale! And of course it features Claude Rains, well known as Nutsy from Moontide, in one of the most unusual debut roles any actor ever had - ha ha, his face is never seen until the last minute of the picture!

You’ve got to admire how this one gets going - not with a bunch of boring experiments that fail and must be tried again and again until success is achieved, but with the invisible man already invisible, already well on the way to homicidal madness, and seeking a place to set up his new lab and discover a way to un-invisibleize himself! After a wonderful set of edits showing the uncommonly translucent man arriving at the door of a pub, swathed in bandages and sporting overcoat, gloves, hat and glasses, he takes a room from landlady and professional screecher Una O’Conner, whom we know so well from The Bride of Frankenstein, and her husband, Forrester Harvey from Kongo, who later gets knocked down the stairs!

Naturally the invisible man, Jack Griffin by name, can’t get a lick of work done thanks to the constant botheration he suffers from the reluctant landlady and the nosy townsfolk, who are intrigued by his dark glasses and creepy bandages and haughty, demanding manner! Word of his unusualness spreads, and he must do a few jumpabouts and shock the simple country folk with his floating shirt routine! And then he must repair to the home of a colleague, Kemp, whom he terrifies into helping him with his experiments! Kemp is played by William Harrigan from Flying Leathernecks and Francis Covers the Big Town, and when he can take it no more and reports there’s an invisible man in his home, Griffin threatens to kill him at pre-cisely ten o’ clock the following night! And you know he means it, ha ha!

Gloria Stuart from The Old Dark House and Wildcats plays Flora, who had a love connection with Griffin back when he was visible and of more pleasant disposition! Her father, old Doc Cranley, is Griffin’s mentor, played by Henry Travers from Ball of Fire and Shadow of a Doubt, and of course he wants to help, but there’s no helping this transparency because he’s become a big jerk, a homicidal one at that, pushing people off cliffs and whatnot! He also likes to kick people in the bum! Clearly (ha ha!) he must be stopped, but even with a police force made up of ringers like Holmes Herbert from Tower of London, E.E. Clive from Mr. Moto’s Last Warning, Dudley Digs from The Hatchet Man, Harry Stubbs from Frankenstein Meets the Wolf Man, and Donald Stuart from Suspicion, it all comes down to a farmer who hears disembodied breathing in his barn!

Well, this one is a real crackerjack if you ask me! James Whale sure knew what he was doing, the trick effects are absolutely top-notch, the script and the performances are witty, and Rains has just the voice to play this part! He’s not just a voice of course - he does plenty of physical stuff when he’s in his bandages, and he’s good at that too! And most of the actors or even day players who have to react to being touched, jostled, or attacked by him also do pretty fine work! So it’s all very well done, and on top of that an invisible man is in some ways a much scarier entity than a vampire or a werewolf or even a Frankenstein monster! At least he is to me! My only regret in watching it was that I didn’t wait a few weeks, because it’s a pretty good winter movie! But it’s also a pretty great movie any time of year, and so I give The Invisible Man three and a half footprints in the snow!