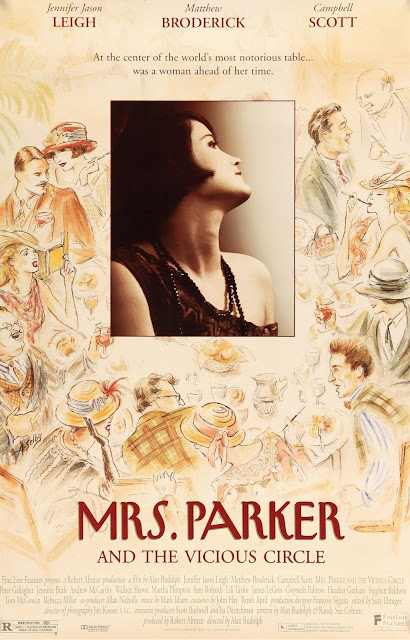 With a big bouquet of bon mots, it’s Burl, here to blab about a biopic! Well, a sort of a biopic anyway - it concentrates mainly on one particular chunk of its subject’s life! The subject is Dorothy Parker, the chunk is the Roaring Twenties, mostly, and the movie is Mrs. Parker and the Vicious Circle!

Jennifer Jason Leigh from Eyes of a Stranger and Grandview U.S.A., using a more languorous variant of the accent she sported that same year in The Hudsucker Proxy, plays the feisty wordsmith, who’ll throw back a drink and toss out a quip faster than you can sing exclavius! As the picture begins, she’s slaving away writing reviews at Vanity Fair alongside her friend Robert Benchley, played with astonishing amiability by Campbell Scott from Singles and The Daytrippers! The relationship between these two, which is platonic but suffused with tender regret and longing, as well as a fond formality which has them addressing one another as “Mrs. Parker” and “Mr. Benchley,” is the emotional spine of the movie, and was to me a stirring one!

The centerpiece of the film, ha ha, is of course the Algonquin Round Table, which we see the genesis of as Parker, Benchley and the many witticists of their acquaintance gather at the storied Gotham hotel for lunch, filling a booth as more and more of them arrive and causing the exasperated maître d’ (Wallace Shawn, back in a restaurant again as in My Dinner With Andre, but not a patron this time) to finally roll in a big round table and let this gang of tongue-runners do their thing!

The verbosophisticates include Lili Taylor from Mystic Pizza as author Edna Ferber; Sam Robards from Fandango as magaziniste Harold Ross; James Le Gros from Phantasm II as music critic Deems Taylor; Nick Cassavetes from Quiet Cool as playwright Robert Sherwood; Tom McGowan from True Crime as Alexander Woolcott; David Gow from Pin as Donald Ogden Stewart, and Martha Plimpton from The Goonies as Jane Grant! Ha ha, it’s quite a gallery! We also get Jennifer Beals from In the Soup and Vampire’s Kiss as Benchley’s undemonstrative wife Gertrude; Matthew Broderick from Ferris Bueller’s Day Off as Charles MacArthur, who breaks Parker’s heart; Andrew McCarthy from Weekend at Bernie’s as Eddie, the drugs-addicted war veteran whom Parker married twice; and Keith Carradine from Thieves Like Us aw-shucksing it up as Will Rogers!

The picture follows Parker through her numerous heartbreaks and increasing reliance on the bottle, and includes many examples of her mordant wit and her difficulties in writing what, and for whom, she wanted! The drama is broken up, unnecessarily I feel, with monochromatic interstitials in which Leigh drawls bits of Parker doggerel! I suppose these were justified by Rudolph and Leigh as opportunities for people unfamiliar with Parker’s work to experience it, and therefore understand why they should be watching a two-hour tribute film about her, but I can’t agree with this logic! However, hearing that funny, sad, alarming verse is never a bad thing, so it’s not a fatal problem!

Leigh’s performance is a highly affected one, but after all she’s playing a highly affected person! It’s altogether very skilled work on Ms. Leigh’s part, and indeed the entire cast seems to have caught the spirit of the thing! Plenty of credit for this must surely go to the director, Alan Rudolph, who must have worked hard to create the sort of atmosphere in which these sorts of performances - naturalistic portrayals of highly artificial people - may flourish! My favourite is Scott’s performance as Benchley, though, possibly because he reminds me of a friend of mine, and because, as I said, his friendship with Mrs. Parker truly is touching! And he pulls off the Treasurer's Report beautifully!

Ha ha, Rudolph has made plenty of pictures, and some of them are very much Rudolph movies while others, like Endangered Species or an early number called Premonition, are not so much! Mrs. Parker and the Vicious Circle is perhaps the Rudolphiest of his movies however, and it’s no surprise to find Robert Altman’s name in the credits as a producer! Montreal does a very creditable job of standing in for New York, and Rudolph’s evocation of the period is exemplary! I liked Jan Kiesser’s cinematography too, and on the whole there’s something very sweet and cozy and lunchtime about this movie! Ha ha, I give Mrs. Parker and the Vicious Circle three banquettes!

Email ThisBlogThis!Share to TwitterShare to FacebookShare to Pinterest
Labels: 1990s, biopic, drama, NYC, period piece, romance, saw it on a date, saw it on the big screen