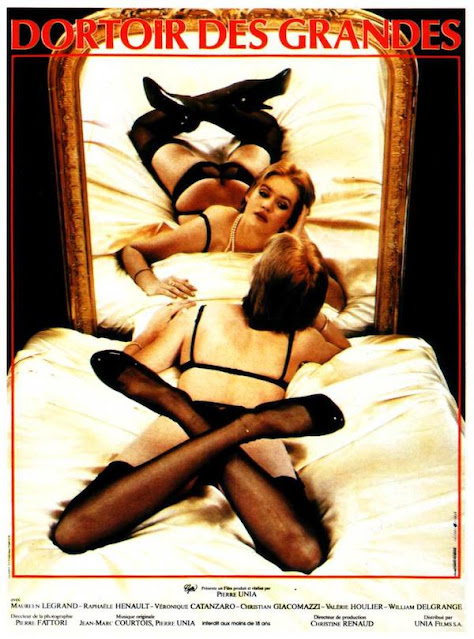 Eh bien, bonjour les gars et les gamines, c’est Burl! Ha ha, today I’m reviewing a French picture for you, and how very French it is! Way back in the mid-80s, when this movie was new, my friend Doug somehow managed to tape most of it onto a VHS cassette, which we then watched over and over again! But the beginning of the movie was missing, and we didn’t know the title, so we referred to the picture as Dormitory F!

Of course the movie was packed to the brim with naked ladies, which accounted for the bulk of its appeal, but it also featured a scene in which the ladies visit a punk club and listen to a catchy song we called “Ansari Anse!” For years since then, I sought out both Dormitory F and that catchy punk song, but being as how I didn’t know the proper titles for either of them, this proved difficult! But once again Doug came to the rescue: once again by mysterious means he found the movie, put it on a little flash drive instead of a VHS tape this time, and gave it to me, and now it’s my pleasure to reveal the proper title of the picture: Dortoir des grandes!

That translates most directly to Senior Dormitory, but I believe the standard English title for it is College Dormitory! In any case, I was excited to see this movie again after so many years of it living (and growing and mutating) in my imagination! It turns out to be the tale of a girl called Adeline, who, her father being dead and her mother who knows where, lives with her stepmother and the stepmother’s creepy doughboy sweetheart! When these two start getting cozier with her than she would like (pulling her into the bathtub, spiking her drinks, double-teaming her in her bed, that sort of thing), Adeline’s superhuman equanimity finally fails her and she demands to be sent to a private school for girls!

The bulk of the picture plays out at this academy! The other girls are reasonably welcoming, with the only holdout being Juliette, the bad girl, who becomes jealous! Good-natured Mowgli, who I guess is called that because she’s black, becomes Adeline’s good pal, and all the girls are pretty cuddly with one another when you get right down to it! Fanette, the dean, is a very pretty lady, but a grouchy and insecure one who is prone to having affairs with her students! Her current objet d’amour is Juliette, and boy does Juliette get steamed when Fanette’s interest shifts to Adeline!

Instead of a plot, the movie simply features scenes of the girls doing stuff! They take group showers of course, and massage one another, and play little pranks on their teachers, and at one point they lock the dean in her room and have a dorm party with some invited boys and a poster of Rocky watching over them! Of course the highlight is the visit to the grungy basement punk club, where a band called Les Porte Mentaux play a song not called “Ansari Anse,” but rather “Ah ca ira!” Ha ha, I can’t tell you what a pleasure it was to finally see this scene again after all those years, and hear that catchy song! And the scene is just terrific all around, and brought back memories of my own visits to grungy basement punk clubs! Though I don’t recall the punk ladies taking their tops off and dancing around as happens in this picture, and also the bathroom seen here is the nicest punk club bathroom anyone ever heard of, ha ha! Normally you feared for your life in those bathrooms, and if you were smart you stayed out of them altogether! (It was the germs you feared, mind you, not your fellow punks, who by and large were a pacific bunch off the pogo floor!)

So all that was great, and it’s nice that in the last quarter of the film, after a suicide attempt that nobody seems to worry overmuch about, the location shifts to the Caribbean, where Adeline accompanies Mowgli for an erotic holiday, and then the arrival of Fanette complicates matters slightly, and the whole thing takes on a Melody in Love sort of a vibe! But otherwise I must admit that the movie is fairly desultory, with no art and precious little craft in evidence! The script is very piecemeal and the characterizations extremely confused! It’s mainly a series of scenes in which people grope and snog one another for a while before they invariably cut abruptly to a new scene! I’m not sure if more explicit stuff was snipped out, but I don’t really care either because, naked ladies notwithstanding, the bohankie scenes get boring and repetitive as always seems to be the case with pornoo, or near-pornoo! Still, I enjoyed it because it brought me back to those days when movies like this were a big deal! Ha ha! I give Dortoir des grandes, the former Dormitory F, two posters of Ator the Fighting Eagle!