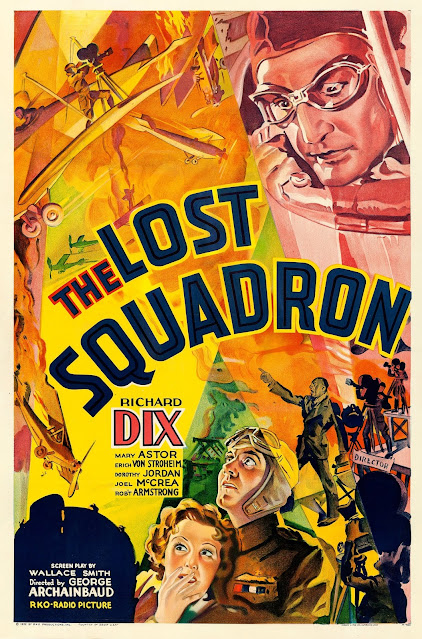 Hello chums, it’s Burl, here with a nifty picture about flying fliers and the flights they flew! It’s a story about some airborne veterans of WWI, the Great War, and what happens to these fellows once the hostilities have ceased, and it’s called The Lost Squadron!

It opens in the final five minutes of the war, as our heroes try to down as many German planes as they can, and then, as the 11 AM bell strikes on November 11, exchange a last friendly wave with their former enemies and fly back to their airfield! Ha ha, it really pushes the alleged gentlemanly aspects of the war, in much the manner as it was parodied many years later by Monty Python in The Meaning of Life, except here it’s in earnest!

Our boys are upright Gibby, played by Richard Dix from It Happened in Hollywood and The Ghost Ship; Woody, the most carefree of a pretty relaxed bunch, essayed by a cheerful Robert Armstrong from King Kong and The Mad Ghoul; Red, handsome and charming, in the person of Joel McCrea from Foreign Correspondent, Sullivan’s Travels, and of course the great Ride the High Country; and their potatofaced mechanic Fritz, played by Hugh Herbert from The Black Cat and Hellzapoppin’! At their demobbing they are told nothing has changed since they left for Europe, but on their return Stateside they find everything has! Personal disasters - bankruptcy, cuckoldry, so forth - befall each man, which they accept with astonishing stoicism; and one drinking scene and a quick montage later, all but one of them have become rail-riding hobos!

On the distaff side we have Mary Astor from The Palm Beach Story and of course The Maltese Falcon playing Gibby’s ex, the ambitious, inconstant Follette - a character not dissimilar to how Astor herself was perceived by the public a few years later when she was beset by the sort of scandal that small, Puritanical minds think is important! As well there’s a crucial character called The Pest, who is Woody’s little sister and is played by Dorothy Jordan from The Searchers!

Gibby, Red, and Fritz, the three members of the squadron who have become stewbums, make their way to Hollywood, where they discover Woody living the good life as a stunt flier for the then-booming genre of aerial war pictures, and The Pest worrying about him and trying to stop him from his habit of drunk flying! Woody’s glad to see his old pals and convinces them to join him in the lucrative if still dangerous endeavor, and so it is that the squadron once again find themselves facing off against a fiery German enemy: this time the shouty director Von Furst, played by The Man You Love To Hate, Erich von Stroheim! Not only is he a sociopathic martinet in jodhpurs, but he’s now married to Gibby’s old flame Follette, who’s the female star of the movie! Ha ha!

Well that is a coincidence! And it’s not one the perpetually angry Von Furst is willing to countenance: he decides to get rid of Gibby by dousing his plane’s guywires in acid! But the irrepressible Woody takes the sabotaged plane up instead, and when Gibby, having realized what’s happening, goes up and flies alongside Woody trying to warn him about the acid attack on his wires, Woody just laughs and gives him the finger! Ha ha!

Well, after the wires break and Woody crashes in a spectacular conflagration, it’s clear to the remaining three that revenge is required, though there is disagreement on the type! However, before this can be resolved an accidental gunshot claims the autocratic filmmaker, and down the stairs he tumbles! Ha ha, the boys have to pull a Weekend At Bernie’s with Von Furst’s corpse to fool a slow-witted watchman who heard the shot! From there events proceed as they must, with noble subterfuge and sacrifice abounding, and in a final touching coda, the squadron members who’ve succumbed in the course of the story reappear as ghost fliers piloting ghost planes!

It was a real pleasure to watch this peppy little picture, I must say! The stunt flying is impressive, and the cast a real delight, and the pre-Code shenanigans are terrific! The gentlemanly comradeliness of the squadroneers is almost alien in its profundity and relentlessness! Von Stroheim is good in his role as the heavy, even if he’s more or less playing a more homicidal version of himself, and the layers of postmodern irony with which the narrative is infused seems almost unintentional, which fact merely adds another layer, ha ha! It’s a crackerjack and no mistake, so I give The Lost Squadron three toasts to fallen comrades!