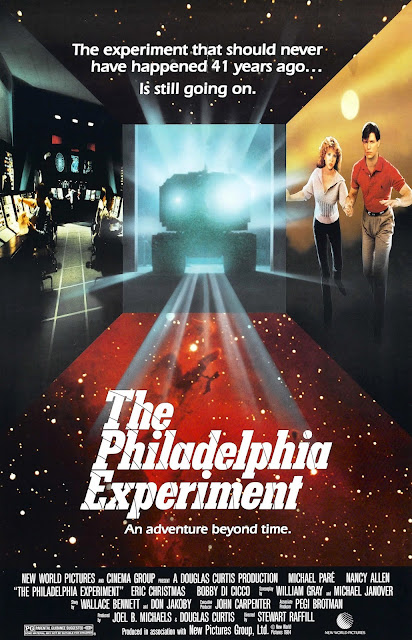 Hurtling through a time tube, it’s Burl, here to review a four-dimensional film from my VHS-spent youth! Now, I’m not talking about The Terminator here, nor Time After Time! I’m not even talking about The Final Countdown, but rather a picture that might have passed that one going the other way in the time tube, a picture known to all as The Philadelphia Experiment!

This is apparently something that John Carpenter was gong to direct, and I’m sure that would have been enjoyable, but he ended up only as an executive producer! This fact puts the movie into a small little group: Mid-Budget Movies Of The 1980s That Carpenter Had Something To Do With But Didn’t Direct, and this is a group which includes Black Moon Rising and not a lot else - ha ha, maybe those cable TV Westerns he wrote that came along in the early 1990s!

Anyway, The Philadelphia Experiment begins in 1943 with a group of Navy men participating in a science experiment intended to make ships invisible to German radar! Instead the test ship is blasted into a time tube, and when two sailors, played by Michael Paré from Streets of Fire and Bad Moon and Bobby Di Cicco from I Wanna Hold Your Hand and The Supernaturals, leap over the railing, they land in Utah c. 1984! Finding an empty bottle of Löwenbräu has them worried the Germans might be lurking around, but on entering a café to discover Humanoids From the Deep playing on TV, they realize some crazy time travel must have occurred!

From here much of the movie is a chase, with an army base security chief played by Kene Holliday from No Small Affair pursuing them from the wastelands of Utah to the orange groves of California and back again! And here we have the root problem with the movie: for every scene in which the police or the Army security folks almost catch the two sailors, and there are many of these, we miss out on some potentially interesting time travel ramification scene! Oh sure, we get a few instances of Paré watching TV or goggling at modern miracles like the aluminum can, but the whole second act is just a big chase, with little scenes of Paré getting to know his new future friend Allison Hayes, who is not fifty feet tall, but is played by Nancy Allen from Robocop!

Along the way, for reasons never made clear, DiCicco’s character suffers fits and ends up disappearing back to 1943! Paré becomes terrified that this will happen to him too, but that's also confusing since I thought he wanted to go home! Still, it’s a good thing he doesn’t, because it turns out that what’s going on is that the scientist who did the experiment back in 1943, who is now elderly and played by Eric Christmas from The Changeling and Porky’s, is up to his old tricks again, and this time has tried to make a small fake town invisible to radar! Ha ha! But this has opened a time tube and all of 1984 is at risk of being sucked into it! Christmas somehow knows that the only solution is to put Paré into a space suit, pop him out the top of a tank and up into the time tube, and have him turn off the generator in the ship! Of course, ha ha, he doesn’t just turn it off, but smashes everything in the control room, especially the evidently critical array of time bulbs, because after all that’s more exciting and cinematic than just turning off a switch!

Louise Latham from The Sugarland Express shows up playing the oldlady version of a friend of Paré’s from 1943, and the picture also features an early appearance from Stephen Tobolowsky from Single White Female, back when he was still moderately behaired! He’s still a glasses nerd, though! But none of this changes the fact that the movie seriously mishandles the potential of its premise! It’s entertaining enough, and the fact that I watched this more than once back in the VHS days, and even had the poster up in my room, seems to confirm that; but you can’t escape the feeling that somewhere, in some dimension or behind some time portal, a much better and more thoughtful movie called The Philadelphia Experiment was made! I give this Philadelphia Experiment one and a half punk rockers!