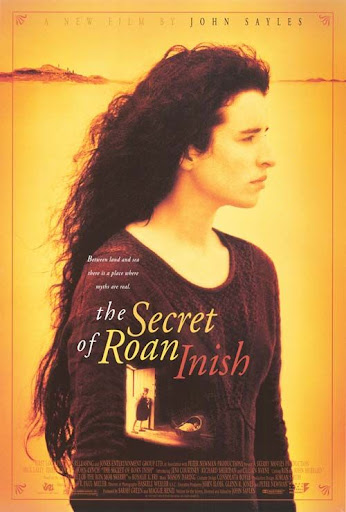 Ay-ti-tai-ti-tai-ti-tai, it’s Burl, here with an Irish tale of seaside blarney! Ha ha, this is a picture I remember writing aboout back in the old movie reviewer days, but fear not, what you're reading right now is all new, all Burl! The enjoyment I derive from this defiantly uncommercial entertainment has remained constant, however, and the movie in question is John Sayles’s The Secret of Roan Inish!

My DVD copy of this picture claims it to be “Sayles’s most popular movie ever!,” which is a bit like saying sour cream & onion is the most popular Old Dutch Flavour Favourite! Ha ha, those in the know are the lucky but the (relative) few! Anyway, I’d have thought Lone Star was his most popular movie ever, but that shows what I know! This one, The Secret of Roan Inish, is very charming and has broad appeal to all ages, so I guess its putative popularity makes sense!

In Donegal, up in the north-west of Ireland, just after the Second World War, a wee lassie of ten, Fiona, played by charming young Jeni Courtney, has just lost her mother, and her father must work in the factories! So she goes to the coast to live with her grandparents, two kindly souls who live on the seaside and stare out at Roan Inish, the island their family used to occupy but had to move away from because the government told them to or something! Mick Lally from The Fantasist plays Hugh, the bearded grandpa, and Eileen Colgan from Quackser Fortune Has A Cousin in the Bronx is moody Grandma Tess!

The family are the Coneelys, and over the course of the film we hear plenty about their family history and the mythical stories around it! Most recent of these is the tale of young Jamie, Fiona’s younger brother, who was in his boat-shaped cradle one day as they were packing up to leave the island, when he shot out to sea and was apparently lost to the waves! And yet in the three years since, he’s been sighted many a time captaining his little ship around the coast, often in the company of the seals who dwell there also! And from Tadgh, a tetched and dark-haired Coneely who cleans fish and is played by John Lynch from Hardware, she hears the back story of how a Coneely man became romantically involved with a selkie woman, which is to say a sort of a were-seal!

Well, this gives little Fiona a lot to think about, and she discuses it and makes plans with a fellow who became one of my favourite characters in the picture, her cousin Eamon, played by Richard Sheridan! He’s a young teen with charming manners who decides to believe Fiona when she reports finding evidence of habitation on Roan Inish and seeing her little brother running around in the altogether! It becomes evident to the two kids that the seals, or the selkie people, simply want the Coneelys to once again take up residence on the island!

Well, ha ha, I’m not usually a fan of magic realism, because it’s mighty hard to pull off! Sayles nails it, however, perhaps because he never tries too hard: the fantastic elements are underplayed as much as possible! It helps, too, that the picture is so earthy, so tethered to the world it creates, so matter-of-fact instead of pushily magical! The musical score is emblematic of this, sticking with Chieftains-like airs rather than, say, doodly-doo synthesizers!

It may seem far removed from Sayles’s genre screenwriting work, but this picture after all has a strong water-creature angle like Piranha and Alligator, and a transformation scene like in The Howling, if a little less elaborate, ha ha! The cinematography from Mr. Haskell Wexler is unflashy, but works perfectly for the piece, and occasionally a beautiful shot is tossed at you! There’s an especially nice sequence on a cliff-side meadow dotted with yellow and purple flowers!

Whether or not it adds up to much is up to each individual viewer, I think, but by organically creating such a complete world and welcoming audiences into it with seemingly no effort at all, Sayles has really pulled off something special! I give The Secret of Roan Inish three enormous beach bonfires!