Hi, it’s Burl here to review the remake of one of my favourite movies of all time, Roger Corman’s 1959 classic A Bucket of Blood! This remake, which generally goes by the same title but is also known with admirable prosy as The Death Artist, is not, I must frankly say up front, quite a match for its inspiration!
That’s the case despite the fact that they’ve almost used Charles Griffith’s original script word for word! They’ve added a few more mock performance pieces, such as might be found in a movie like Cellar Dweller or Head of the Family, but otherwise there’s not been much deviation from the Corman picture! That’s sensible as far as it goes – ha ha, why mess with success! But success is messed with in other ways, ways I will enumerate for you shortly!
For those of you who don’t know the story, canonical though it is, the action takes place at a beatnik café, here called the Jabberjaw instead of the Yellow Door, at which a slow-witted busboy named Walter Paisley labours unhappily, watching all the artists around him stewing in their pretentions, wishing desperately that he too was a creative soul! His desperation leads, as it inevitably must, to murder! Ha ha! 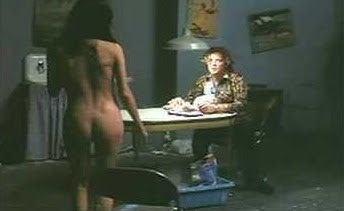 Well, it’s kind of odd that this picture was remade at all, since it contains no monsters and only a few murders! But remade it was, with great fidelity as I’ve mentioned! Anthony Michael Hall, famous for having gone Out of Bounds and doing some Weird Science, steps into Dick Miller’s very sizeable Walter Paisley loafers, and comes up wanting! It’s a tough job setting yourself up for comparison with the man Corman himself once called “The best actor in Hollywood,” and I guess Hall’s willingness to do so shows just how desperate his career straits were at the time! After all, it had been almost a decade since Out of Bounds!
Despite overplaying both Walter’s pathetic self-pity and his murderous aggression, Hall is not too bad in the role! Justine Bateman’s take on Carla, however, is a little weird! She chooses to do some kind of Eastern European accent and wear art-doyenne glasses, which pointlessly changes her character from the girl-next-door she was in the original! That’s why Walter fell for her in the 1959 version after all: she was the only island of apparent normality in that sea of jaundiced pretension; but in the remake she’s just another fauxhemian!
Some of the actors in the remake are good (ha ha, Will Farrell is great as a background hanger-onner, and David Cross has a few marvelous moments in the role of The Bearded Sycophant; and can you believe it, Shadoe Stevens more or less pulls off the role of poet Maxwell Brock), but none of them are as good as the Corman company players in the original! There are more naked ladies in this new one though, that’s for sure, and it does pull off a sort of quirky out-of-time comfortableness that’s within shouting distance at least of the Corman/Miller classic! I give the remake of A Bucket of Blood two bottles of Yugoslavian white wine!
Posted by Burl at 11:58