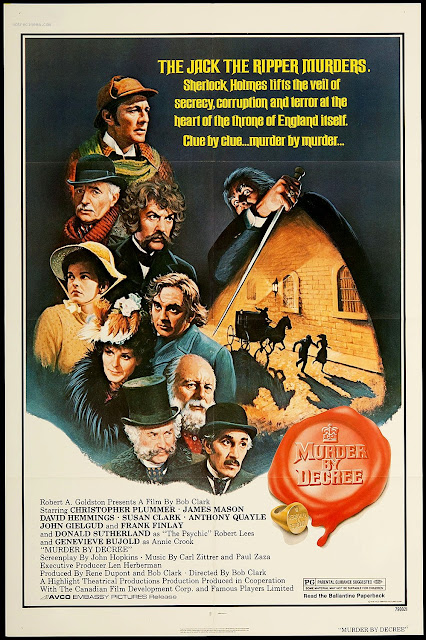 By the powers of deduction, it’s Burl, here to review a Sherlock Holmes tale from the director of Porky’s and Black Christmas! Ha ha, yes, Bob Clark, who made all genres of picture in his career before regrettably coming to a violent end on the Pacific Coast Highway thanks to a loathsome drunken driver, here tries his hand at a star-studded detective picture which pits the famous consulting sleuth against the terrors of Jack the Ripper! Ha ha, I suppose it’s not unlike playing H.G. Wells against the Ripper, as we saw in Time After Time, but this picture, Murder By Decree, though its hero be fictional, tries to ground its Ripper theories in as much fact as it can muster!

Like Time After Time, the picture begins with a ripper murder, and then we enter into the cozy buddy-buddy world of Holmes and his pal Watson! These worthies are played by Christopher Plummer from The Silent Partner, Dreamscape and Dragnet, in all of which he was a bad guy, so it’s nice to see him on the side of good here; and James Mason from such varied productions as Bigger Than Life, North By Northwest, and Evil Under the Sun! We meet the duo as they’re out at the opera defusing an anti-monarchist rabble, and soon enough they’re back in the velvet confines of 221 B Baker Street, mulling over the ripper murders at the behest of a group of anarchists!

The case proceeds from there through a gaslit, heavily fog filtered mystery that includes the royals and the anarchists, along with psychics, madwomen, and eventually to the very heart of the power structure! Ha ha, I won’t get into all the details about the whys and whos and wherefores, first because it’s a mystery you should unravel for yourself, and second because I didn’t understand it! Or if I did, I’ve become foggy on the details in the days since I watched it, and having seen it several times before in its incessant broadcasts on Canadian TV through the 80s didn’t help at all!

They say that the Ripper theories espoused here are among the most plausible, however! I myself haven’t done the research, but I wouldn’t put anything past a royal! But verisimilitude aside, the big draw with this picture is the cast, which includes not just the champs playing our lead investigative duo, but such goodniks as David Hemmings of Juggernaut fame in the role of Inspector Foxborough; Donald Sutherland from Invasion of the Body Snatchers and Heaven Help Us as the psychic; Geneviève Bujold from Isabel and Dead Ringers as the madwoman; John Gielgud from Arthur as the Prime Minister; plus the likes of Susan Clark from Night Moves; Anthony Quayle from The Guns of Navarone; Frank Finlay from Lifeforce; and Tedde Moore from Rip-Off! Ha ha, whoa baby!

Clark directs it all in the acceptably workmanlike fashion you might expect and even hope for, and the cinematography is attractive, but fuzzier than a London pea-souper! There are lots of shots of a nicely-built model of the Victorian London skyline, and plenty of extreme close-ups of the Ripper’s bloodshot madman eyeball! And, as byzantine as the plot gets, in the end it all comes to a rather frustrating naught - frustrating for Holmes and a little bit for the viewer as well! It’s got plenty of atmosphere along the way, however, and the period is well-evoked, and it’s just a pleasure to watch that cast! I give Murder By Decree two and a half deadly scarves!