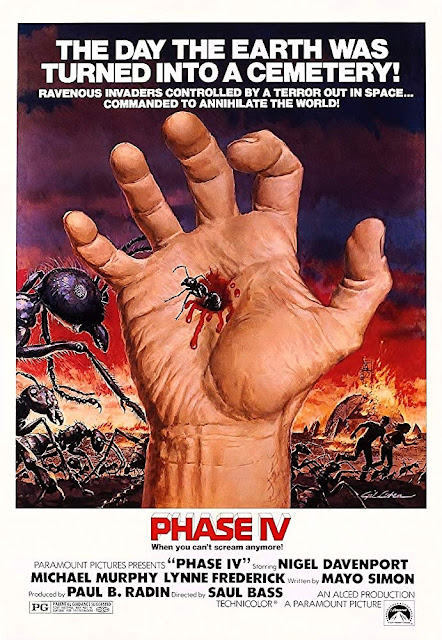 Doodlee-doodlee-doodlee, it’s Burl, here to review another picture about insects! In fact, alongside Bug it’s the other intellectual bug movie released by Paramount in the mid-70s, but this one is generally regarded more highly than Bug! It’s called Phase IV, and it was the only feature directed by Saul Bass, who brought us the marvelous credit sequences of Vertigo, Psycho, and so many others!
It seems, on the surface, to have more on its mind than Bug, but afterward it’s hard to remember what it had to say! The story involves two scientists, one a bearded rationalist played by Nigel Davenport, the other a younger, more relatable fellow played by Michael "Shocker" Murphy! Ha ha, they install themselves in a geodesic dome out in the desert in order to study what’s up with the ants, who have been behaving strangely and building oddball structures!
Well, to hurry the insects up, Davenport blows up their structures with his handy grenade pistol, then sprays the area with a pesticide called 100% Yellow! Whether this kills any ants is uncertain, but it most definitely kills most of a family who’ve been a little late to evacuate! The survivor is a young lady played by Lynne "Vampire Circus" Frederick, who has no idea what’s going on! When Davenport gets an ant bite and his arm blows up like a sausage, things get a little hairy for the trio, and this leads to an ending in which, presumably, the ants move on to phase four of their plan to take over the world, and Murphy and Frederick are invited to be some sort of Adam and Eve of the new formidae reality! Ha ha, frankly the ending reminded me a bit of Invasion From Inner Earth!
Saul Bass was a terrific designer, so we might expect some pictorial delights in the movie, and we get them! The visual treats include, per the credits, “Insect Sequences by Ken Middleham,” who was the go-to guy for this stuff: he also provided Bug with its cock-a-roaches! I was surprised that the interior of the science dome, where most of the story takes place, was not cooler, more Ken Adam; but I guess that wouldn’t have been realistic, as it was intended to be a temporary structure! There’s lots of other neat stuff though, and the photography by the amusingly named Dick Bush is noteworthy!
It’s perplexing that Bass should have chosen this story as the one feature length tale he was determined to tell, but maybe it was the only one he could get financed! But it’s a unique picture, one of those movies whose existence alone is a surprise! It’s not all it might have been, perhaps, and frankly not all it thinks it is, but it’s quick, engaging and well worth a look! I give Phase IV two and a half goggle showers!
Posted by Burl at 14:18