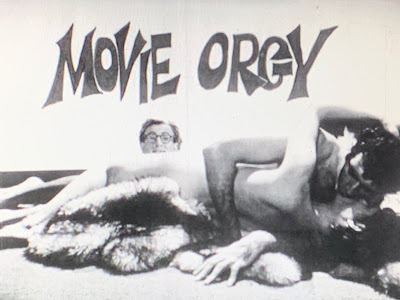 Hello and ha ha, it’s Burl here to review movie madness! Yes, I’ve recently watched Joe Dante’s first film, The Movie Orgy, which he made a full ten years before Piranha, back when he was a student and still wanted to be a comic artist! I guess The Movie Orgy represents Dante’s swing from comics into pictures, and as such I suppose it has historical value to those of us who appreciate the man’s work, even though one waits in vain for a clip with Dick Miller in it! But Dante's a fine director and, ha ha, you all know how I feel about Matinee!
But what is The Movie Orgy? Well, it’s a long pastiche of movies - mostly B pictures -  and television snippets, all cobbled together into a four-and-a-half hour beast that you can easily imagine the aliens from Explorers watching on their space TVs! A few pictures seem to occupy more real estate than others: Dante has distilled the likes of Attack of the 50 Foot Woman, Earth vs. the Flying Saucers, College Confidential (an Albert Zugsmith joint, natch, featuring Elisha Cook Jr. as The Angry Dad), The Giant Claw (the turkey gobbler from outer space, as big as a battleship) and something called Speed Crazy into just the good parts, and woven them all together like stripes on a mackintosh!
Laced into these are bits from other movies, like Teenagers from Outer Space, the 1933 King Kong, Beginning of the End, Moby Dick, and The Giant Gila Monster! We get many olde-tyme television moments too, like an episode of You Bet Your Life in which Groucho enacts something I’ll call The Humiliation of John Farbotnik! Other TV gold includes Andy Devine’s demented kids’ show Andy’s Gang, featuring good old Froggy; a clip of Elvis singing Hound Dog to a big basset in a top hat; US Treasury Bond appeals asking you to Underwrite Your Country’s Might; Nixon’s Checkers speech; and a series of insane Bufferin ads best described as inconclusive mini-dramas about “sensitive people” who care so much about others they need an extra edge to their headache medicine! Ha ha!
There are plenty of clever little editing room goof-offs, like a bit that starts with the opening title to The Naked City, followed by a short silent vignette from the 1920s involving a young inventor who has created a strange viewerscope upon which he can call up images of a topless ladies! Of course he is interrupted by his mother, which must be a familiar scenario to many of to-day’s computer-screen teenagers! Then we pop back to The Naked City, and the closing spiel: “There are eight million stories in the naked city; this has been one of them!”
We come away from The Movie Orgy with some fine quotes, like “That Skippy is too much for television!” from College Confidential, and the endlessly repeated “Everybody’s always crowdin’ me!” from Speed Crazy! There are lots of funny juxtapositions and a few editing tricks, and assorted monster movie, Western, and jungle picture clips, and lots of credits too, which I appreciated; and on top of all that the funniest Abbott and Costello skit ever: the Susquehanna Hat Company! Ha ha, great stuff!
The last reel jumps equally between 50 Foot Woman, Giant Claw, Earth Vs. the Flying Saucers and Giant Gila Monster, with other clips salted in to make an ironic point, or a joke, or an ironic joke, or no point at all! Finally there’s a bloom of The End cards, and people signing off or walking out or saying goodbye, and even Nixon claiming this would be his last press conference and you wouldn’t have Nixon to kick around any more! Cut to an audience clapping with enthusiastic approval, ha ha! And there are a few other good jokes at Nixon’s expense, and, looking forward, a couple of jabs at Ronald Reagan too! None of it's very slick - ha ha, you can practically hear the rattle of the Moviola and see the tape splices - but you can tell it was made with heart!
Dante, who created this college collage with his pal Jon Davison, remembers “great drifts of funny-smelling smoke” coming from the crowd wherever this was screened (mostly university halls), and it seems to me funny-smelling smoke is the right mindset to adopt for this experience! It’s got lots of easy jokes, sure, but it’s equally easy to forget that this would have been a lot of work to put together back in the actual-film days! Oh those glory days! The Movie Orgy is a pretty special creation, and I give it three Skippies who are too much for television!
Posted by Burl at 18:26