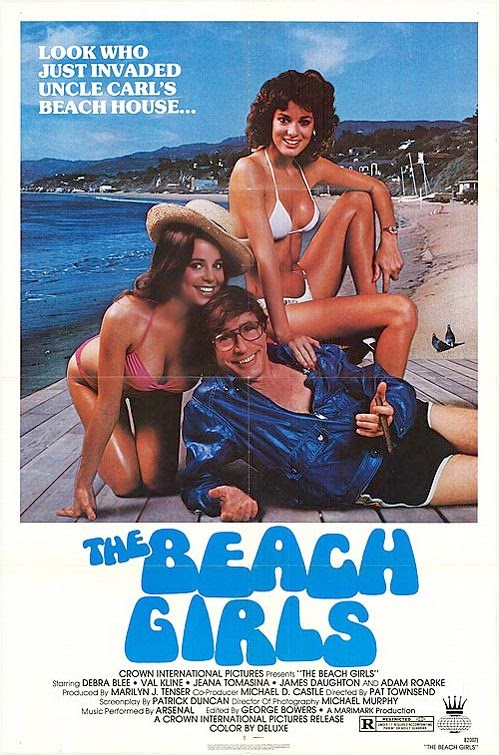 Hul-lo, hul-lo, it’s Burl at the beach! Ha ha, yep, it’s me, here with a review of another Crown International beach picture from back in the day, but not nearly as far back in the day as it seems to be from! Ha ha, I’ll explain! The picture is called The Beach Girls, and it was apparently made in 1982, but in almost every way it seems to have jetted in straight from 1976!
There’s just something about it! Maybe it’s the presence of James Daughton from that earlier Crown International classic Malibu Beach, or maybe it’s that the movie was probably shot on short ends left over from the mid-70s, or maybe it’s Ginger and Duckie, the pair of hormonal Id creatures which power this Tempest-like endeavor! Ha ha, the more I think about it, the more this appears to be a beach party adaptation of The Tempest!
Debra Blee, who would later appear as a shrill harpy in The Malibu Bikini Shop, is the Miranda figure, who is granted the use of her Uncle Carl “Prospero” Purdue’s beach house for the summer! Along for the trip are her pals Ginger and Duckie, who work together as the shapeshifter Ariel in my Shakespearian reading of the picture; and their laid-back, guitar-strummin’ pickup Scott, who makes a pretty fair Fernando! Chaos agents Ginger and Duckie quickly whip up a party by inviting everyone from the pizza boy to the diaper lady to get down and boogie! Skulking about like Caliban is the mustachioed gardener, played by Bert Rosario from Stick, who peeks through windows and fences at all the sunbathing and skinny-dipping ladies, and who eventually finds himself mud wrestling with a Chinese chauffeur! Ha ha!
There’s some nonsense about marijuana smuggling, and garbage bags full of pot that wash up on the beach and end up befogging and enchanting the partygoers’ minds, but it doesn’t add much that a few generously-filled joints wouldn’t have just as well! Adam “Frogs” Roarke, as Uncle Purdue, arrives in the middle of the party and magicks up a metaphorical storm by suggesting that he doesn’t want a party going on at his house after all! Meanwhile an astronomer neighbor trains his telescope on the beach house rumbustification while his perpetually irate wife hounds him unmercifully! The wife is played by the very familiar Mary Jo Catlett, who faced beach trouble of a different kind on Blood Beach! Ha ha! 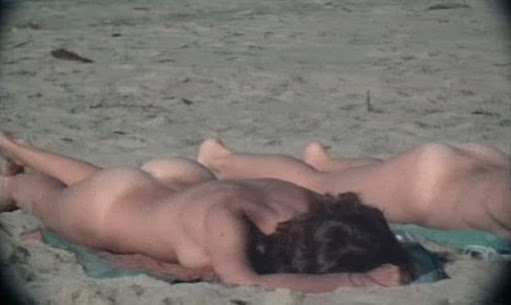 It’s got a lot of antics and quite a number of naked ladies, but it still seems kind of sluggish and slightly pep-free! It’s also even sillier than it should be, with the sad trombone making frequent appearances! But there’s enjoyment to be had nevertheless, and the consequence-free world it proposes is pretty attractive, ha ha! I can’t say it’s great, I can’t say it’s good, but it fairly lives up to its title, and that’s a pretty strong compliment right there! Ha ha, I give The Beach Girls one and a half pocket salamis!
Posted by Burl at 00:28