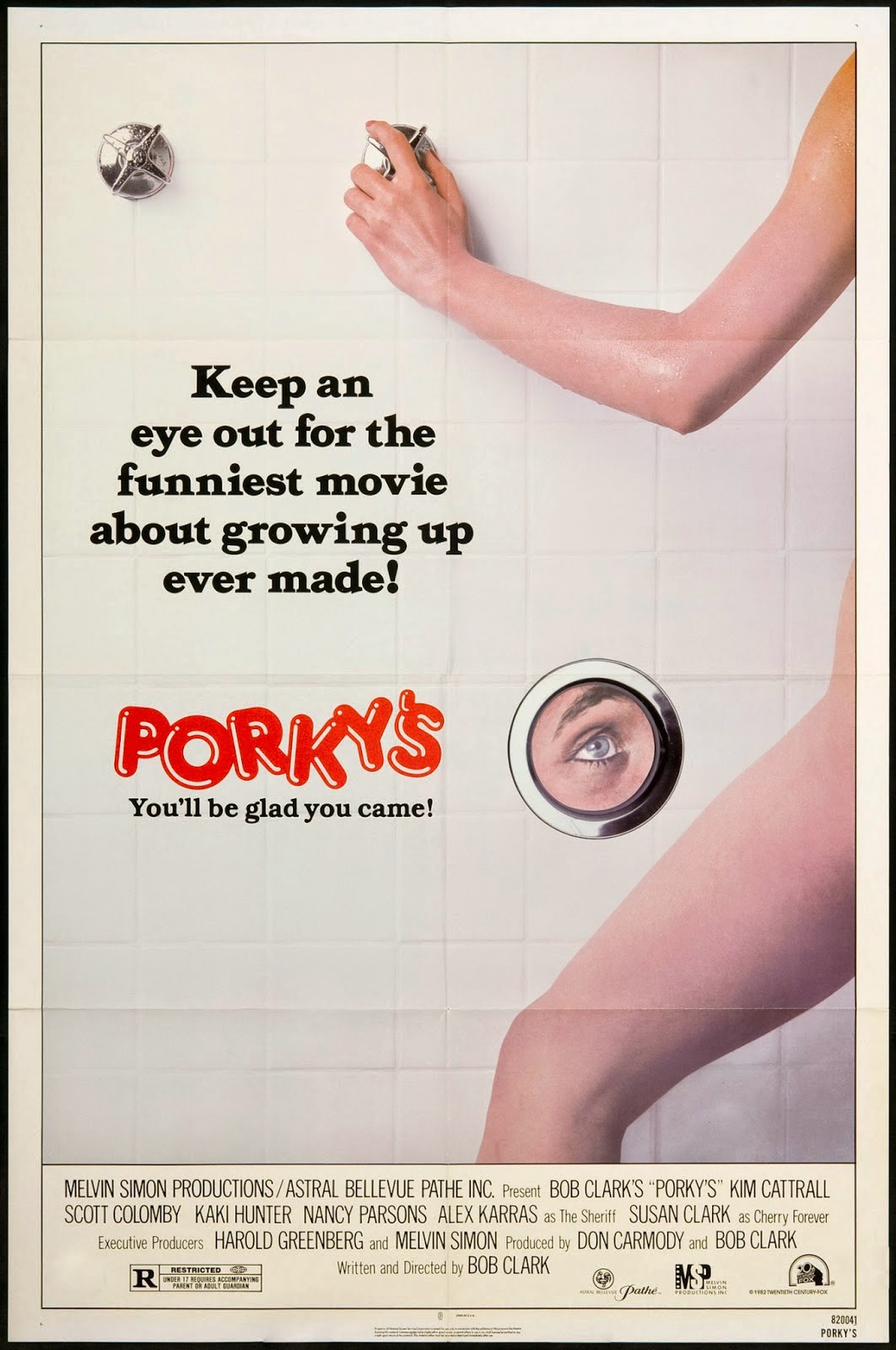 Oink oink, it’s Burl, here to review a very famous and beloved teenage sex comedy, Porky’s! You’ve probably seen it, and so had I, several times in fact, but recently I somehow discovered myself watching it again!
Ha ha, shall I reacquaint you with the plot? Well there isn’t one, not really, but there are several situations and these are strung along separately in a sort of continuation that creates the facsimile of a narrative! The setting is Angel Beach, Florida during the Eisenhower era, and the lads of Angel Beach High, all of them looking like they ought to have seen the back of Angel Beach High during the Truman administration, are up to various shenanigans! Ha ha, we never see them in a classroom, for their days are dedicated to complicated pranking scenarios and efforts to espy their female classmates in dishabille!
We learn about Pee Wee’s problems of length, and about Meat’s surfeit of same! We are introduced to the Jewish boy, Brian, who’s handy with his dukes! There’s the young greaser redneck with father problems, and some nondescript boys without any defining characteristics! There are some coaches and coachettes, including the legendary Ms. Balbricker (played by Nancy Parsons from Smokey Bites the Dust and Motel Hell!), and an older-brother cop played by Art Hindle from The Brood! And eventually there is Porky, and the lads’ confrontation with him at his eponymous hostelry, and their final victory over the inbred and corrupt forces of crackerdom!
Of course the movie has more on its mind than just shenanigans! In fact, it dares to tackle a Very Serious Issue: anti-Semitism among the JD set! Ha ha, there are several punch-ups on the subject in fact, and lessons are finally learned! And then in celebration an egg is broken on someone’s forehead!
But the centerpiece of the picture is certainly its famous shower scene! Ha ha, the boys crawl into some part of Angel Beach High, where, within a crawlspace, they find some nonsensical peepholes that the Porky’s art department threw together without bothering to reconcile how such peepholes could exist in the first place!
And that’s our good luck, because that would be boring! Instead we get a very busy shower scene, containing “so much wool you could knit a sweater!” Ha ha! It’s the scene this picture is known for above all others, and rightly so! Between viewings of the picture, I’d be hard-pressed to tell you what goes on in many of the other scenes, which sounds like a callous dismissal of the picture, but in fact I count it as an advantage, since it lends the thing endless rewatchability! Ha ha!
The movie has a nice fog-filtery look and is well directed, and on top of it all is, like Spring Break, perfectly cast! Most of the actors never did much other than this movie (with the exception of several Canadians, including Kim “Big Trouble in Little China” Cattrall and Doug “Black Christmas” McGrath; and of course we know that Porky himself was in Good Bye Cruel World), but they are each of them perfectly cast! It’s an enjoyable if silly movie, and no wonder it was such a hit! I give Porky’s two Pigmobiles!
Posted by Burl at 22:39