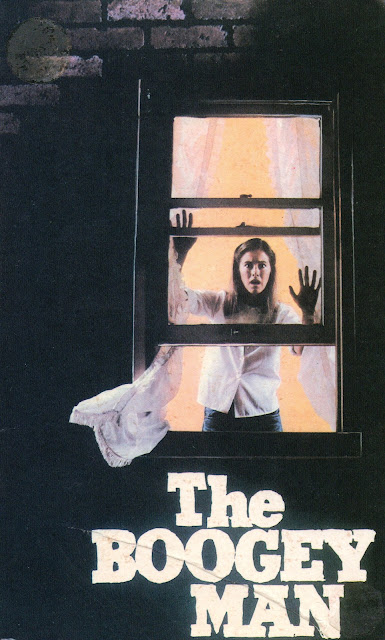 Hodely-hodely, it’s Burl here! Yes, here to review another movie, this time a spookshow from the early 1980s called The Boogey Man! This was a movie that always stood out in the horror section of the video store because of its evocative box art and (for a youngster) scary title! It was made by Ulli Lommel, the same fellow who later brought us The Devonsville Terror, which is not a well-loved movie, but, to me anyway, has a certain something that raises it above the typical bad, boring horror movie!
Does The Boogey Man manage the same trick? Well, in part it does! It manages to mill its Poverty Row budget into a certain amount of regional charm, and though it’s never as scary as the poster and title promise, it has an earthiness about it that I like! And the region in which the picture is set, namely the shores of Chesapeake Bay, is not one I’ve seen used before in such a picture – it reminded me a little bit of the Long Island Sound shores seen in the early Amityville Horror movies!
The story is a little different than the usual sort of thing as well, which is nice! It seems that twenty years ago, Lacey and her brother Willie saw their mother making love to a man in a panty-hose! Ha ha, he had the panty-hose on his face, I mean! Anyway, he gets the chop, and the whole thing is witnessed by an ugly mirror! Twenty years later Lacey and her Wonder Bread of a husband live on a farm with her grandparents and Willie, who is now a mute! Lacey starts having flashbacks to That Night, and her psychiatrist, John Carradine (whom we know and love from Satan’s Cheerleaders of course!) advises her to visit the house where it all happened! Well, the mirror gets broken by a chair-wielding Lacey, and then evil things start to befall random teenagers!
Ha ha, those are the good parts, really! One teenager, a fellow wearing a Triumph shirt, gets a poke through the neck! Another one runs afoul of a scissors, and, as in The House on Tombstone Hill, an annoying youth learns the mortal dangers of leaning in through a sash window! It all wraps up back at the farm with some pitchfork impalings and a touch of possession, and these climactic scenes reminded me how much I like it when movie characters in some horrific situation have to run from the house to the barn and back and forth again! Here are some movies with scenes like this: Critters, Deadly Blessing, The Strangers, Blood Massacre and Friday the 13th part III! There are probably more, but that’s all I can think of for now!
On the debit side, The Boogey Man is a pretty lame movie that makes very little of its interesting concept! Ulli Lommell may have worked for Fassbinder in his younger days, but that didn’t stop him from making some pretty bad movies! I’m going to give this one one and a half lazy susan hiding spots!
Posted by Burl at 23:53