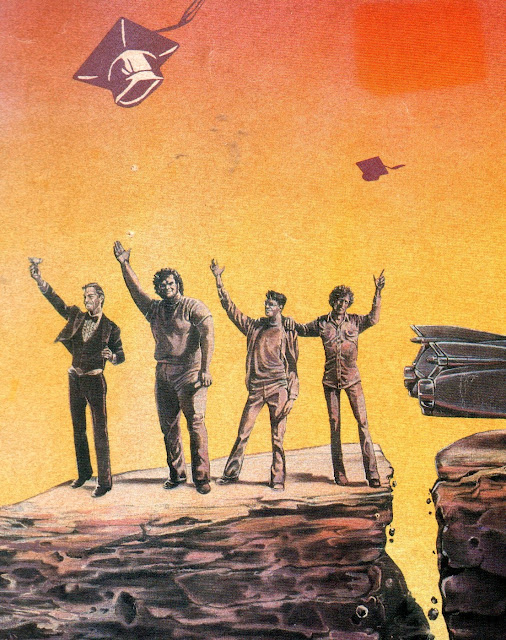 Good day son, it’s Burl! Yes, I’m here to review an old favourite of mine, the bittersweet good-time road trip Fandango! This was an inspirational picture for my friends and I back in junior high or whenever we watched it! It seemed like it dealt with a whole set of concerns we would soon be wrestling with ourselves – except for the being drafted to serve in Vietnam part, ha ha! Otherwise it seemed to hit all the right notes, and it was a stylish and funny movie in the bargain – one of those 80s film school brat pictures like Three O’ Clock High and Vamp!
The story begins in Austin, Texas, in 1971! A group of college pals called The Groovers set out on a multi-day, sunbaked odyssey to recreate a legendary trip from their earlier days! Kevin Costner, famed from his role in Malibu Hot Summer, is the leader of the gang, and its other members include none other than hotshot Judd “Blue City” Nelson, playing against type so effectively that I thought for a while this was his type; a fellow played by the appealing where-did-this-guy-disappear-to Sam Robards; a massive giant of sedate temper and supernatural strength played by Chuck Bush from Terror in the Swamp; and a perpetually passed-out fellow who spends most of his time unconscious on the back deck of the gang’s Caddy!
Ha ha, the gang has a robust series of adventures, including the time they run out of gas, the time they shower in a car wash, the time they meet a couple of small town ladies with a taste for fireworks, and the time Judd Nelson goes skydiving! Ha ha, that particular adventure was the short film this picture grew out of, and the pilot of the plane in both the short and feature versions is a memorable eccentric played by Marvin J. McIntyre! Eventually, after a lot of shouting, the young fellows achieve their goal: the disinterment of their old pal Dom!
The movie still pushes those buttons of melancholy for me, particularly at the very end where the friends variously do and don’t say goodbye to one another! The little exchange between Judd Nelson and big Chuck Bush (“Goodbye, friend.” “Have a nice life”), and the music that goes with it, really hits me right there!
It’s not a perfect picture or anything! It can get a little sappy here and there, the arguing is a bit repetitive, the emotional arcs are simplistic, and the story is episodic in the extreme! There’s a soundtrack of songs that are for the most part too obvious (ha ha, "Born to be Wild" again?), or else tonally unlikely given the characters (Carole King? Ha ha!)! I will admit that good use is made of Elton John, of all people, and the end credits song, Blind Faith’s “Can’t Find My Way Home,” is a perfect choice in every respect!
There’s a nice group of performers decorating the edges of the picture too! Pee Wee’s girlfriend Elizabeth Daily, known from Streets of Fire and No Small Affair, is in there, as is Pepe Serna from Out of Bounds and of course Buckaroo Banzai! Glenne “Dirty Rotten Scoundrels” Headly plays a hippie chick! And whoever the guy is who plays the rancher ordering food at the Dairy Queen, that guy is great! Too bad this was his only picture!
I’ll certainly cop to being a bit of a soft touch where this movie is concerned, but I’m sure many others who caught it at the right time feel just the same way! Any way you slice it, it’s an enjoyable if minor picture! I’m going to give Fandango three chili dogs and a malt!
Posted by Burl at 14:25