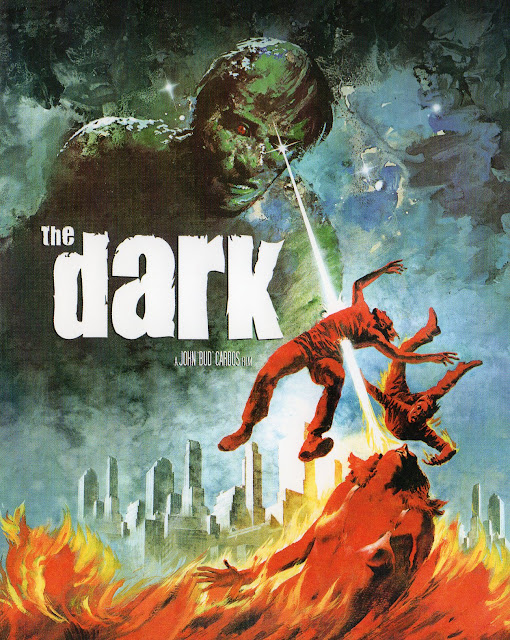 It’s Bur-r-r-r-rl here to review a scary movie! Or at least a movie that tries to be scary! I’d imagine that of all the people who watched it, it was the scariest to the original screenwriter when he saw what it ultimately became!
Back when I used to read James Herbert books, I thought The Dark was an adaptation of his novel of the same name! It turned out not to be, though, and not by a long shot! But I did end up reading the novelization of this picture before ever seeing the movie, and the funny thing is that the novelization has almost as little to do with the final cinematic product as Herbert’s book, or Moby Dick or Ulysses for that matter!
Well, all I can do is review the movie itself, so here goes! It seems there’s a monster of some kind on the loose in Los Angeles, a mad mutilator who roars and lunges out of the darkness, usually in the vicinity of a menacing blind man! The first victim turns out to be the daughter of William "Rolling Thunder" Devane, a pugnacious horror novelist who some years back had run afoul of Inspector Richard "Starman" Jaeckel, who is now investigating the case of the towering madman!
Well, just as an elderly psychic lady on a yacht predicts, the killings continue! But it turns out that the madman has laser eyes, and moreover, as midget newsie Angelo "Mad Max Beyond Thunderdome" Rossito cries out from his streetcorner, “Mangler’s a zombie! Mangler’s a zombie!” (That was Rossito’s day job when he wasn’t acting, by the way – he really did run a newsstand, and the one we see in The Dark was likely the actual one!)
Anyway, once we find out that the killer is as likely to blast you with animated eyebeams as rip your head from your shoulders, all bets are off! News anchoratrix Cathy Lee Crosby uses her second-generation feminism to persuade boss Keenan "Piranha" Wynn to let her finally do some real journalism and cover this important story! Finally the killer is revealed to be some sort of bluejean-wearing alien, and he really doesn’t like cops! Ha ha, he blasts about a hundred of them in the loopy climax!
Ha ha, this is a true cruickshank of a picture and no mistake! It started out with Eaten Alive director Tobe Hooper at the helm, but he got canned as he so often did in those days, and they got the guy who made Kingdom of the Spiders to come in and take over! And then at some point, perhaps just shortly after the opening weekend of Alien, they decided to change the killer from an escaped maniac zombie to an escaped maniac zombie alien with laser eyes and denim slacks!
It’s got a pretty good cast though, and some of the performances are not too bad! It reminds me a bit of an urban version of Without Warning, which came out around the same time I think! It’s a living daffodil, this movie, but I’m in a generous mood and I’m going to give it two flying officers of the law!
Posted by Burl at 21:51