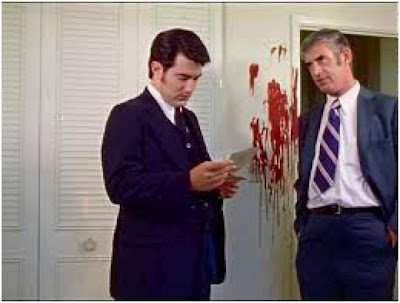 Hi, Burl here to review a weird and strange little movie! Ha ha, it’s called Satan’s Black Wedding, and it’s one of those little no-budget 1970s treasures you run across every now and again!
Now I must caution you: it’s not a treasure because it’s a particularly good movie! In fact it’s one of the most poorly-made movies I’ve ever seen! Framing, camera placement, scene structure, general mise en scene – all of this was most studiously ignored by the filmmaker, Nick Millard! But I don’t hold that against him, because the movie sort of works anyway!
The movie starts with a lady slashing away at her wrists with a razor blade, causing a nearby mustache man to sprout a mouthful of enormous cardboard fangs! Then Mark, a Hollywood actor, is shown driving up to Monterey to attend the lady’s funeral! She was his sister Nina, and she had apparently spent the two years leading up to her suicide researching and writing a book about demonology or something!
Mark chats with a weird and creepy priest and then checks out the suicide room of his sister! Considerately, the cops have kept it as she left it, and Mark and the lead investigator chat comfortably for a while in a room splattered with Nina’s lifeblood! It seems the cop is not satisfied that Nina killed herself, and neither is Mark! He plans to stay in Monterey, bunking in his sister’s over-mullioned house as long as it takes to solve the crime! He teams up with an old girlfriend who used to be friends with Nina and was helping her write her terrifying tale of the supernatural!
But then toothy attacks by zombie vampires, including the late Nina, begin in earnest! Though Mark repeatedly states his intention to stay in Monterey in spite of everything, all the people he speaks to about the situation – his aunt, his aunt’s maid, the cop, his old girlfriend – fall victim to these horrific assaults! Eventually it turns out to have something to do with how Satan would like Mark to marry his sister! Well, Mark beats feet when he hears that, but will he make it safely back to Los Angeles? You’ll have to see the movie to find out!
Ha ha, this isn’t a great movie, but believe it or not, a few of the sequences are a little bit scary! And it’s really a very weird movie too, a condition which of course rates pretty high with ol’ Burl! It’s a bad movie, make no mistake about that, but it’s a bad movie with heart, and some nice locations, and some gruesome scenes and some hilariously bad acting, and many other qualities that make it enjoyable! I give Satan’s Black Wedding one and a half vile manuscripts!
Posted by Burl at 22:33