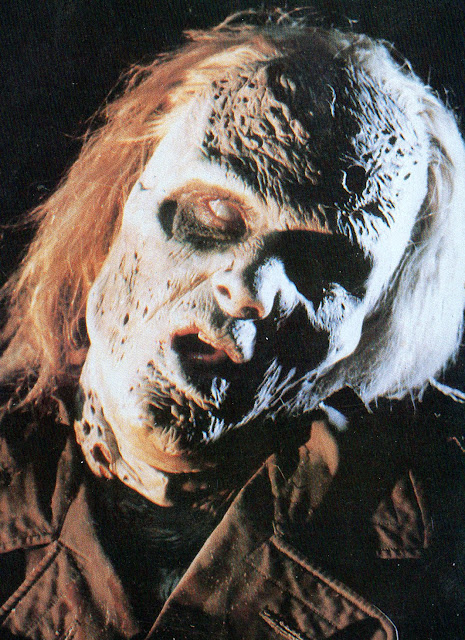 It’s Burl marching in, hurrah, hurrah! Yes, I’m here to review what I used to think was supposed to be a zombie movie, and now I’m not so sure! It was sure promoted as one, but the truth is there aren’t many more zombies in it than you could fit in the photobooth at the Monroeville Mall!
It starts during the Civil War, with a nasty Union officer forcing supposed Confederate partisans, including a young boy, to walk across a mine field! Almost everybody gets blown up except the kid, but he turns magical and creates a display of low-budget optical effects which dazzles everyone! Then it’s the present day and a corps of weekend warriors led by the salty Nichelle Nichols troupe into the mangrove on maneuvers! But, ha ha, they’re the same regiment as the long-ago bluejackets who perpetrated the opening massacre! So: zombies!
But not for a while! First there’s plenty of speed-running and wandering about the not-very-swampy swamp, and arguing, and Nichelle Nichols sounding off like the D.I. from Full Metal Jacket! Then they find a few booby traps and subterranean passages, and eventually guns start blasting away at them from the trees! Finally, after a scene in which one obnoxious recruit attempts to make sweet love to another, we get some shambling zomboid creatures dressed in rags and clutching muzzle loaders! Ha ha, there are even one or two mild gore scenes, and it’s the lack of serious tomato paste that really segregates this picture from the zombie genre! (One review I read, possibly Dr. Cyclops’s review in Fangoria, noted that the probable reason they didn’t have Nichelle Nichols get disemboweled is that it would have taken too long!)
This is really one of those in-betweeners: a movie that’s not awful in the way that so many pictures are, and even has a few things here and there to recommend it (a pretty shot, a personable character, a good trick effect), but is really such a bland bowl of paste that no more than a day or two after watching it, you could easily be tricked into watching it again, having forgotten that you ever did so in the first place! The premise is not bad, and it’s okay with ol’ Burl that it’s not just another zombie movie, but it could have used a little more of just about everything, and a little less trudging through what is clearly California and not Louisiana! Southern Comfort meets Dawn of the Dead this is not!
I’m going to give The Supernaturals one and a half pretty lady recruits, and by garr it should count itself lucky to get that much!
Posted by Burl at 15:26