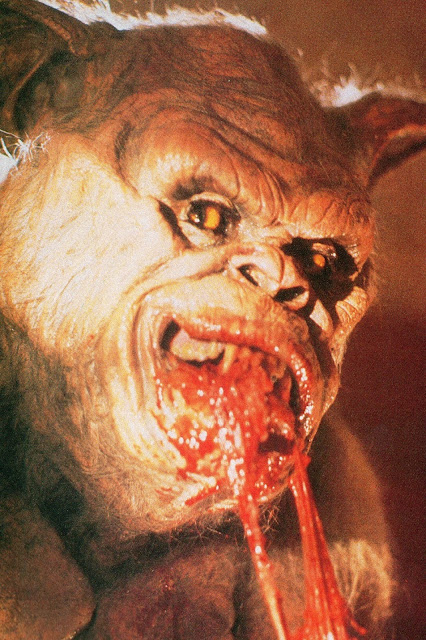 The cellar door flies open suddenly, and standing there is Burl! Ha ha, don’t be scared readers, I mean you no harm! I’m just here to review another scary picture from that wonderful, terrible decade, the 80s!
This one is firmly in line with other monster-suit pictures of the era, movies like Rawhead Rex and Pumpkinhead! With its single location, small cast and clearly limited budget, it’s kind of like a little cousin to those movies! Ha ha, I like monster-suit pictures, I do admit! Nothing wrong with dressing a tall guy in a suit and having him roar a bit and wave his arms and bop people on the head for ninety minutes, no sir!
Cellar Dweller doesn’t manage ninety minutes of it though! I think it’s about seventy-five, and that’s including the typical long, slow Empire Pictures opening credits, just like we see in From Beyond and Re-Animator and The Dungeonmaster and other Charles Band productions of the 80s! It has a fairly crackerjack opening sequence, though: it’s the 1950s, and Jeffrey Combs from Re-Animator, always a welcome presence, is a comic book artist working alone in his basement studio! He accidentally conjures up a demon and a victim for the demon just by drawing them, and then, in his efforts to banish the demon back to the two-dimensional world from which it sprang, somehow manages to immolate himself in the fakest fire since Carnival Rock! Ha ha!
Well, the next thing you know it’s the present, or at least 1987, and Combs’s house has become an artists’ residence, lorded over by its director, beauty queen and ex-Munster Yvonne DeCarlo! The people who made this picture don’t seem to know any artists or have ever been near a real artists’ residence though, but that’s okay! This one is more like a bughouse, with a motley and multi-disciplinary group of creative sorts following their muses but who may as well be weaving baskets! Among them is a hard-boiled detective novelist played by Vince Edwards, Claude himself from Murder By Contract! Of course there’s a performance artist (we can’t have a movie like this without some fake performance art, which someone ought to collect for a real installation piece of their own!) and a finger-painter, and finally our heroine, the comic artist lady who is flabbergasted to unearth her idol Jeffrey Combs’s old studio and his hocus pocus artifacts!
Well, the movie is half over before the monster shows up again, but when he does he starts a-killin' right away, scratching and biting and knocking off heads! His violence is somewhat at odds with his strangely kind face, which makes him look a bit like Harry the Henderson’s brother! But he keeps up his spree until our comic artist believes she’s figured out how to dispatch him; but this leads to the entire rest of the cast being consumed by more extremely fake flames! Ha ha! There are a few other fake-out endings beyond that, as I recall!
Well, just as Class Reunion seemed to be trying its level best to be anything at all but funny, Cellar Dweller appears to be spending most of its energies on not being scary! The monster is shown in all his glory right off the bat, and shot very unimaginatively! But the director, John Buechler, who is also the trick effects man – that’s his day job – has made the monster look a little bit like himself, which he often seems to do with his creatures, and so maybe he didn’t want it to ever be too horrific lest he be thought horrific himself! Anyway, it’s got its moments, and some interesting cast members (future schlock Hollywood comedy director Brian Robbins is in there as the finger painter) and a bit of the old tomato paste and stretchy-skin, so I give Cellar Dweller one and a half bottles of “White Off!”
Posted by Burl at 01:26