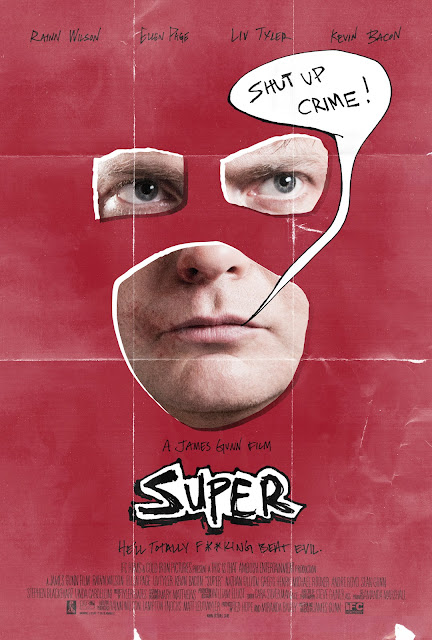 Hi, Burl here to review one of those movies about regular people who decide they want to be superheroes! Ha ha, there was a little spate of these movies a couple of years back, sort of like when there were all those body-switch movies in the 80s, or the time they made two Truman Capote movies at the same time!
Well, Super is the grittier, lower-budget version of this story, sort of like 18 Again was the scrappy underdog of the body-switch pictures! A sullen, hefty fellow plays a short-order cook whose ex-junkie wife runs off with Kevin Bacon! This gets him pretty mad, and despite not caring much about superheroes, he decides to become one! He makes a red suit and names himself The Crimson Bolt, the man with the pipe wrench hand! And he has a little pal, Boltie, a teen lady who is a comic book nerd girl, but who turns out to be more or less psychotic! Ha ha!
The movie tries pretty hard to be realistic, I guess, but it’s still a film about a guy in a costume fighting a lowlife meanie criminal drugs dealer! Although maybe that’s not such a stretch – the other day in the paper I saw a picture of a SWAT team at work, and one of them was carrying a sort of shield that I swear to biscuits had batwing edges on it! But where it gets not so realistic is in its main character’s ability to shrug off gunshot wounds with little more than a grimace! Even if the bullet “just goes right through,” as the Bolt affirms his have done, and even if you manage to avoid sepsis or gangrene, you’re still not going to be able to movie around with much speed or agility for quite a little while, much less mount a climactic assault on a bad guy’s ranch-style home!
But its surfeit or lack of realism, whatever the case, is the movie’s problem, not mine! I thought it was generally not bad, with some witty dialogue, a hilarious Jesus-centric TV show parody,  a few affecting moments, some fairly spectacular violence here and there (achieved using special makeup effects, ha ha!) and an overall scrappiness that kept me intrigued! It wasn’t as enjoyable as the director’s previous work, Slither, but that’s okay! There was still an opportunity for Slither veterans Gregg Henry (an underrated actor!) and Michael Rooker to deliver fine performances before suffering blood-soaked gunshot death scenes!
I guess I’ll give Super two and a half gruesome half-faces!
Posted by Burl at 11:07