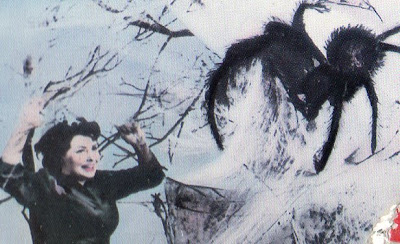 Ahh ha ha, Burl here again! Have I ever told you how terrified I would be if giant insects were real? I can hardly think of a worse way to go, which I why I always get a pretty good shudder from a big bug movie! This picture, The Strange World of Planet X, which is maybe better known as Cosmic Monsters, appears at first glance to be just such a photoplay! Well, not so fast, as you’ll soon see!
The Strange World of Planet X actually more closely resembles a feebler version of X the Unknown  or an even feebler version of a Quatermass picture than it does big-bug classics like Them or Tarantula! Like X the Unknown it takes place largely in a U.K. laboratory staffed by Brits and one lone middle-aged American, in this case Forrest Tucker from The Crawling Eye and The Abominable Snowman! The lab is working on some sort of weird science that turns metal into cookies when they accidentally open up a hole in the ionosphere!
Ha ha, after that, a very long time after that it seems, we get some big bug attacks, including one in which a poor guy’s face is eaten off! Ha ha, who knew these old British sci-fi movies were so gory! But before the bug action we get lots and lots and lots and lots of chatting scenes about science, and also some hilarious sexism and other such verbal elements! But after a while you think to yourself “Ha ha! This is all well and good, but I thought I was watching a giant bug movie!”
As the movie moves along, new characters come out of the woodwork at regular intervals, including some other scientists, an army guy or two and a friendly space alien in the tradition of The Day The Earth Stood Still! But eventually there’s a big-ish spider seen in the woods, and some centipedes and I think some doodlebugs also! But none of it is as creepy as it should be, even to a guy like me who is, as I mentioned, terrified of big bugs!
Sometime soon maybe I’ll get to reviewing those other two Forrest Tucker British sci-fi horror pictures, because both of them are much better than this one! But The Strange World of Planet X, or Cosmic Monsters if you prefer, is not without its small pleasures, especially if you have a love of pseudo-scientific bafflegab! I give it one and a half all-purpose ray guns!
Posted by Burl at 17:45