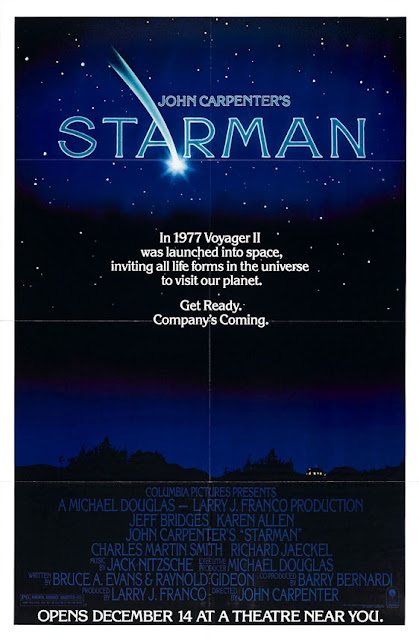 Beep, boop, it’s Burl, here with a picture about an alien’s visit to earth! Ha ha, no, it’s not our old friend E.T., but an alien who looks more like a ball of pure light than a Raisinette under a magnifying glass! Ha ha, he’s the Starman! And no, they never have occasion to play the David Bowie song in the movie, but I’ll bet it was tried at least briefly before being declared too on-the-nose!
There’s a Stones song prominently used however, ‘Satisfaction,’ and this is heard in the opening as we see the Voyager II spacecraft drift past, its hand outstretched in greeting! Our lightball decides to make the trek to Earth, but is shot down as soon as he enters the atmosphere! He bips around Wisconsin a while until he finds the DNA of a dead house painter in the lock of hair kept by his still-grieving widow, Karen Allen, well-known from Animal House!
Well, after a little sequence of rubber alien babies growing into adulthood, put together in separate stages by a superstar team of trick effect artists, the alien takes on the aspect of Jeff Bridges, famed for his great work in King Kong! Ms. Allen can’t quite believe it, but soon the chase is on as the alien tries to make it to the place he can meet up with his buddies before they all leg it back to their own galaxy!
And it’s a Herbie Goes Bananas reunion as Charles Martin Smith and Richard Jaeckel play government fellows with an interest in finding the alien! Smith is a kindly sort who wants to make the alien welcome, while Jaeckel, whom we also know from The Dark and Grizzly, is a hard-nosed fellow who wants to capture and experiment on him, or worse! Meanwhile there are many picaresque adventures, curious culture clashes and wild animal reanimations as the Bridges-alien interacts with everyone from a nasty hunter played by Ted White (he was Jason in Friday the 13th part 4, don’t you know) to, of course, George ‘Buck’ Flower from Teen Lust and Pumpkinhead, who turns up as an amiable chef! Ah, ‘Buck!’
And of course love comes to town, because even a glowing ball of light, whose intellect is stratospherically above any concept of physical attraction, recognizes that Karen Allen is pretty cute! Ha ha! Everything follows pretty much the expected path, though in a generally charming way! John Carpenter does a fine job with this uncharacteristic material, and I think if almost anybody else had directed this, I’d just think of it as a drippy rip-off of E.T.! But Carpenter pulls it off!
I’ve always paired this one with Christine in my mind because they were both made for the same company, and came along during the Cundey Interregnum, when Donald M. Morgan was shooting his films! (This is to be differentiated from the Cundey Abrogation, when Cundey went on up to the Zemeckis / Spielberg leagues, and Gary Kibbe took over the camera and lighting!) It’s as fluffy and studio as Carpenter ever got, with the possible exception of Memoirs of an Invisible Man, but still a mildly engaging watch!
Bridges gives a goofily entertaining performance and does solid work throughout! The trick effects are very good, though the weird growing baby is in its own category; and it’s altogether a polished piece of Hollywood craftwork, with a nicely efficient yet affecting ending! I give Starman two and a half exploding trees!
Posted by Burl at 22:16