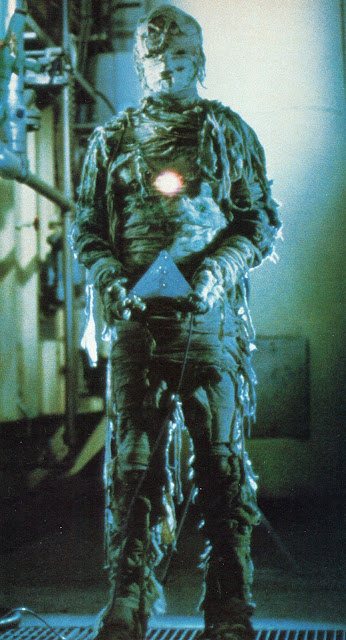 It’s Burl shuffling down the hall at you, and… Boo! Ha ha, surely by now you know how much I love a good microgenre! Well, one I’m very fond of is horror movies set on college campuses! Even when that profile fits a bad movie (and to be frank almost all of the movies in this microgenre are pretty awful - ha ha, look at Primal Rage or Fatal Games!), the scenario gives me a sort of warm and comfy feeling somewhere deep inside!
Time Walker is by no means a good movie, let me just say that right off the bat! It starts out in Ancient Egypt, where Egyptology professor Ben Murphy enters King Tut’s tomb and discovers a mummy no one ever knew was there! Well, the next thing you know the professor is back on his California campus with the mummy and showing it off to all his students! Ha ha, one of the students is his girlfriend, which I thought was against the rules!
Well, due to the machinations of one particularly thick-headed student, the mummy gets blasted repeatedly with X-rays, and as we all know this will wake a mummy up! He goes shambling around the campus grabbing at anyone who has one of his precious jewels which the dunderheaded student stole, and if he touches you that’s it, because you’ll get the dreaded face-eating mold on you!
The big twist, which I think is given away on the movie’s poster, is that this isn’t your garden-variety mummy at all but a space alien who somehow got himself trapped on Earth in ancient Egypt, accidentally killed young Tut with his spores, and then I guess went into some kind of hibernation and was mummified! He sheds his bandages at the end to reveal an alien countenance that most closely resembles a mass-production Halloween mask! The jewels were part of some sort of transportation system, and at the very end, as the mummy is preparing to leave the Earth in a swirl of early-80s optical effects, Professor Ben turns suddenly from an Egyptologist into Richard Dreyfuss from Close Encounters of the Third Kind and goes willingly along with him! The last shot is of a bunch of confused onlookers, including angry dean James Karen from Return of the Living Dead, all scratching their heads! Ha ha, the end!
Well, this is like The Dark I guess, in that for most of the movie you think it’s one type of monster, and then at the end it’s an alien! But at least with this one I think he was meant to be an alien all along! It’s sort of disappointing that he’s not a regular mummy, because I’d have liked to see a genuine low-budget 1980s mummy movie! This is as close as we’ll get though, I suppose! I like the mummy bits and the fact that it takes place on a college campus, and that it has a costume party near the end (always a plus!) and I thought the professor’s student/girlfriend was quite pretty! And also, even though it’s rated PG, it has a lady with no shirt on! Ha ha, I saw this one in the theatre way, way back, and I’ll bet I was pretty impressed at the time! I give Time Walker one and a half extra doses of radiation!
Posted by Burl at 13:06

Email ThisBlogThis!Share to TwitterShare to FacebookShare to Pinterest
Labels: 1980s, aliens, horror, saw it on the big screen, school, sci-fi