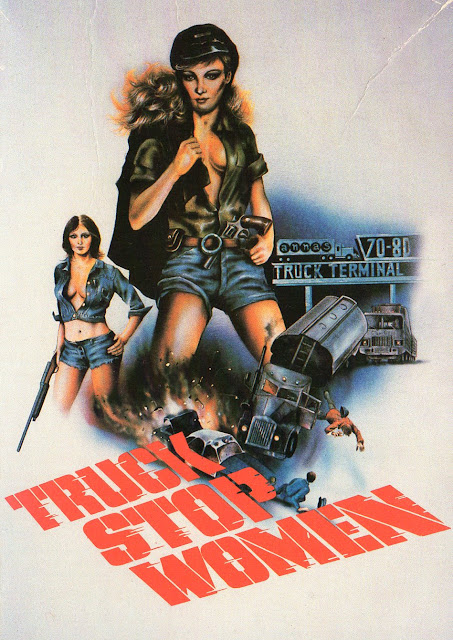 Hi, Burl here with a rootin’ tootin’ truckin’ and shootin’ movie, also featuring plenty of ladies! Ha ha, I’m talkin’ about Truck Stop Women! It’s one of the movies people cite when they’re making the case that some Playboy centerfolds, in this case Claudia Jennings, whom we know from Fast Company, can turn out to be good actors! And as far as Miss Jennings goes, I’m not going to say they’re wrong!
Ha ha, Truck Stop Women is part of a great microgenre I call Cracker Shakespeare! That refers to a movie with a deliberately down-market setting, a tawdry tone and a rough-hewn cast of characters which nevertheless trades in just the sorts of themes (family, loyalty, betrayal) and narrative progressions (everybody betrays everybody and then most of them die) which were the stock in trade of that famed playwright of yore, at least in his more overbaked tragedies!
Lots of Russ Meyer movies fit into this category, and plenty of Roger Corman productions too, and so, you can bet, does Truck Stop Women! It’s set at and around a New Mexico truck stop where Anna, the flame-haired XYL matriarch, runs a bordello for the concrete cowboys who pass by! Queen of the lot lizards is Anna's daughter Rose, played by Claudia Jennings; and beyond the red light activities the truck stop has going on, the ladies, the younger ones anyway, use their wiles to waylay truckers and steal their rigs for repainting and resale! They’re helped out by a couple of amiable good old boys, one of whom is played by Pahoo himself from Creature From Black Lake, the great Dennis Fimple!
The plot hinges on an attempted Mafia takeover of the truck stop, but the ladies aren’t having any of it! There’s vehicular mayhem and popgun shooting galore, and every second scene or so a lady takes off her clothes! The main bad guys are two very hateful syndicate goons, but there are ancillary bad guys as well, including a traitor who gets his in an amazing scene in which he is crushed to death by moo-cows in the back of a cattle truck! And of course there’s the family betrayals and the bodies piling up like cordwood by the end!
It’s really quite grim! But the tragedy is leavened by random scenes of ladies disrobing, the hayseed antics of Pahoo and his pal, and the fine series of trucker songs that pepper the soundtrack! In fact the whole movie stops dead to accommodate a musical tribute to trucks, sung from the truck’s point of view in fact, which is accompanied by shots of eighteen wheelers driving, drivers smiling and waving, other people waving back and so on! And there’s also an encomium to that theretofore unsung hero, the cattle truck driver, which is of course called, ha ha, “Bullshippers!"
It’s a pretty good show! It’s got all the exploitation elements down pat, but offers an unexpectedly rich slice of family drama as well! And Claudia Jennings has a very definite character arc, and while she’s not quite Meryl Streep, she does pretty well with it! I call this a cinematic treat, and I award it three sleeper cabs and only wish that B.J. and the Bear had stopped by this truck stop at some point in the picture! I’m sure a ruckus would have ensued! Ha ha!
Posted by Burl at 23:20