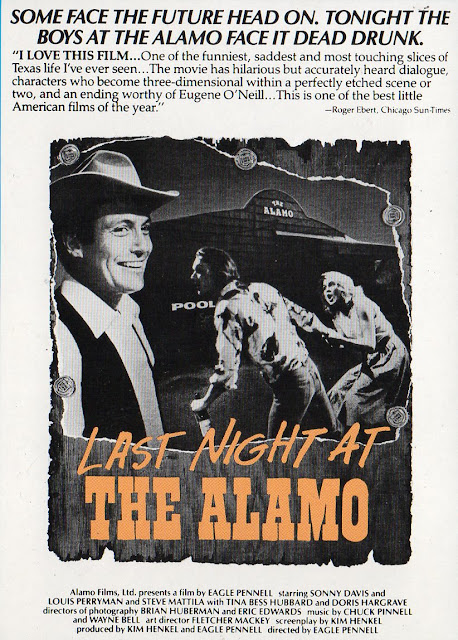 Hi, Burl here to review a little regional picture that I’ve always been surprised didn’t get more attention, though it certainly got some! I remember reading a review of Last Night at the Alamo in one of those Home Video Enthusiast-type of magazines – the sort of magazine that would rate the relative merits of the Panasonic Omnivision IV versus the Sony SL-7200, but also had reviews of the latest tape releases – and it was intriguing to me then, even though I was a horror fan through and through! (I remember that issue also had a review of The Mack, starring Richard Pryor!)
Well, many years later I got my hands on a VHS copy of the picture, and glad I am of that! It’s a very low-budget movie, taking place mostly in one Houston watering hole called, of course, The Alamo! But this is the last night of operation for this venerable establishment, and the regulars who populate the place – among them Claude, played by the great, sadly late Lou Perryman of The Texas Chainsaw Massacre 2 – aren’t ready to give it up without a fight, or at least without a lot of drunken grousing!
The key figure in the drama is unseen for the first act of the picture, but expansively discussed! It’s Cowboy, an amiable fellow never seen without his bucket hat and lazy grin! Ha ha, he’s a local hero type of guy, but there’s something kind of stupid behind his eyes, and it burns brighter as he decides to spearhead the effort to save the Alamo!
Well, it’s a foregone conclusion that they’ll have to settle for remembering it instead, but these fellows have had enough booze that they have no problem believing the place might be spared the wrecker’s ball through a few late-night phone calls to dimly remembered old acquaintances who are now mucking about in state politics! Cowboy proves not to have the influence he’d claimed, and in the meantime Claude repeatedly dials his wife on the pay phone and engages in spectacularly profane arguments with this never-seen woman! Yes, he really lays a salty tongue on her, and no mistake!
By the end of the picture, well, let’s just say that Cowboy’s hat has come off, and the movie has moved from being an ambling, Southern fried slice-of-life to something similar, but darker and more roiling! It’s a handsome-looking black-and-white picture that, at $50,000, must have had a lower budget than even something like Satan’s Black Wedding, but is galaxies ahead in its quality, especially in the performative realm! Ha ha, the acting’s just great!
This is a true indie film from just before the days when that label began to have some cachet! It’s a bit stagebound at times, but well worth watching, and I highly recommend tracking it down! Ha ha, it’s a true Texas gem! I give Last Night at the Alamo three and a half homemade pest control signs!
Posted by Burl at 23:45