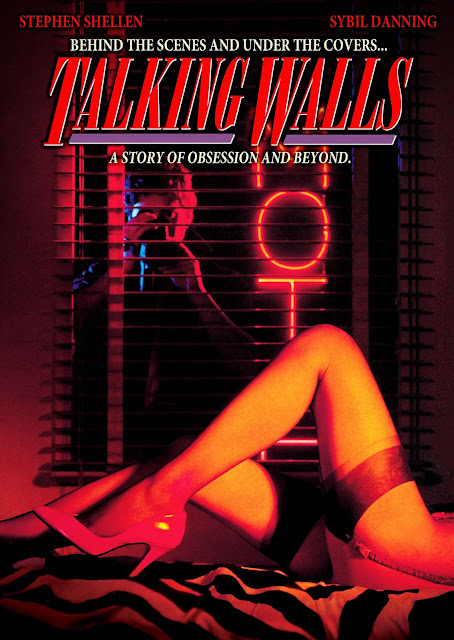 Ha ha, it’s Burl - sheep room activated! Unfortunately, to know what that means you have to have seen Talking Walls, and you probably haven’t! That may be for the best, but I’ll be happy to tell you all you need to know about this curious picture so that you can decide for yourself!

Why is it curious? Well, first of all, it comes from a director whose previous picture, released almost a decade earlier, was a sort of gritty, downmarket On Golden Pond/Death Wish mash-up featuring Lee Strasberg and Ruth Gordon as an elderly couple trying to survive in a rapidly de-gentrifying Bronx! It was called Boardwalk, and in no way by watching it could you have predicted the coming, only nine years later, of Talking Walls!

Our alleged hero in this newer picture, Paul, is played as a real weirdo by Stephen Shellen from Gimme an ‘F’; and no wonder, because the character is indeed a big old motel-living, emotionally adolescent weirdo! He’s a sociology student trying to complete a PhD on “personal relationships” or some such bumblefuzz, and proposes to his professor, played by Barry Primus from Boxcar Bertha, that he gather his data by peeping on the various guests populating (on an hourly basis) the motel he lives at!

To this end he cuts through the motel walls and floors with a demented pervert’s energy, waving a skilsaw around and laughing maniacally as he installs his two-way mirrors and cameras! He records a parade of yolk-faced fartmongers as they play bohankie with ladies (some professionals, others not) in the various theme rooms! Yes, there’s a sheep room, and the theme in there appears to be sheep, but not erotic garter-wearing sheep as we saw in Everything You Always Wanted To Know About Sex (but were afraid to ask)! There’s also a car room, a shoe room, and some others I can’t rightly remember!

So he observes, but is such a poor scholar and abjectly stupid person that he learns absolutely nothing, for which his professor regularly upbraids him! “But I have all the latest equipment!” whines Paul! “It’s got to tell me somethin’ about how people are feelin’!” Meanwhile, the motel guests keep up their performative erotica for the benefit of Paul’s cameras and thermographs, and the picture turns into a series of sexual skits, like If You Don't Stop It... You'll Go Blind!!! or one of those kinds of movies!

There are some familiar faces in the theme bedrooms! Sybil Danning from Howling II, Karen Leigh Hopkins from The Running Man, June Wilkinson from The Bellboy and the Playgirls, and Sally Kirkland from Hometown U.S.A. are just some of the ladies; and the fellows include Don Calfa from Return of the Living Dead, Hunter Von Leer from Halloween II, Peter Liapis from Ghoulies, Mickey Jones from Starman, and Richard Partlow from Alligator! Ha ha, it’s quite a gang!

Finally Paul tries dating a real woman, who turns out to be a Pac-Man playing French lady he finds attractive! Her name is Jeanne, and she’s played by Marie Laurin from Creature, and there’s a long montage of them kissing in picturesque places to the sounds of the worst softrock song of all time! Ha ha, bleargh! Of course the relationship goes south when he won’t let her see his place, because then she’ll know what a desperate pervert he is! The old man who owns the motel – my favourite character by a long chalk, ha ha! – counsels flowers, so Paul steals the ones the old man had just bought his wife, and books the cloud room for his anticipated bohankie! But there’s a twist ending, and it drives Paul mad and has him huffing from a big glass pipe and hallucinating a sort of music video that declares him to be on “The Losing Side of Love!”

It’s a weird movie when you get down to it! The protagonist seems so daft and damaged, and his oddball nature infects the entire picture! He videotapes everything, so much of the movie is literally from his perspective, and it's not a perspective any sensible person wants! There are unexpected intrusions of actual craft now and then, but these only make the whole thing weirder, and in any case nothing could possibly overcome the intolerable character of Paul, a petulant, whiny sociopath who wears leather pants for a scene of dramatic climax, then ends up driving the streets yelling “FIND HER! FIND HER! WHERE IS SHE!” There's more after this - ha ha, it seems to go on and on - but it all eventually wraps up in what I suppose was meant to be a happy ending!

The picture feels about eight times longer than it really is! It’s an extremely curious and off-putting thing, with only the charming old man and the weirdness to make it even worth a mention! I can’t say for sure that it was worth watching, but, as with other bizzarities like Mid-Knight Rider or The Worm Eaters, once it's over you know you’ve seen something most other people never will! I give Talking Walls one recalcitrant Coke machine!