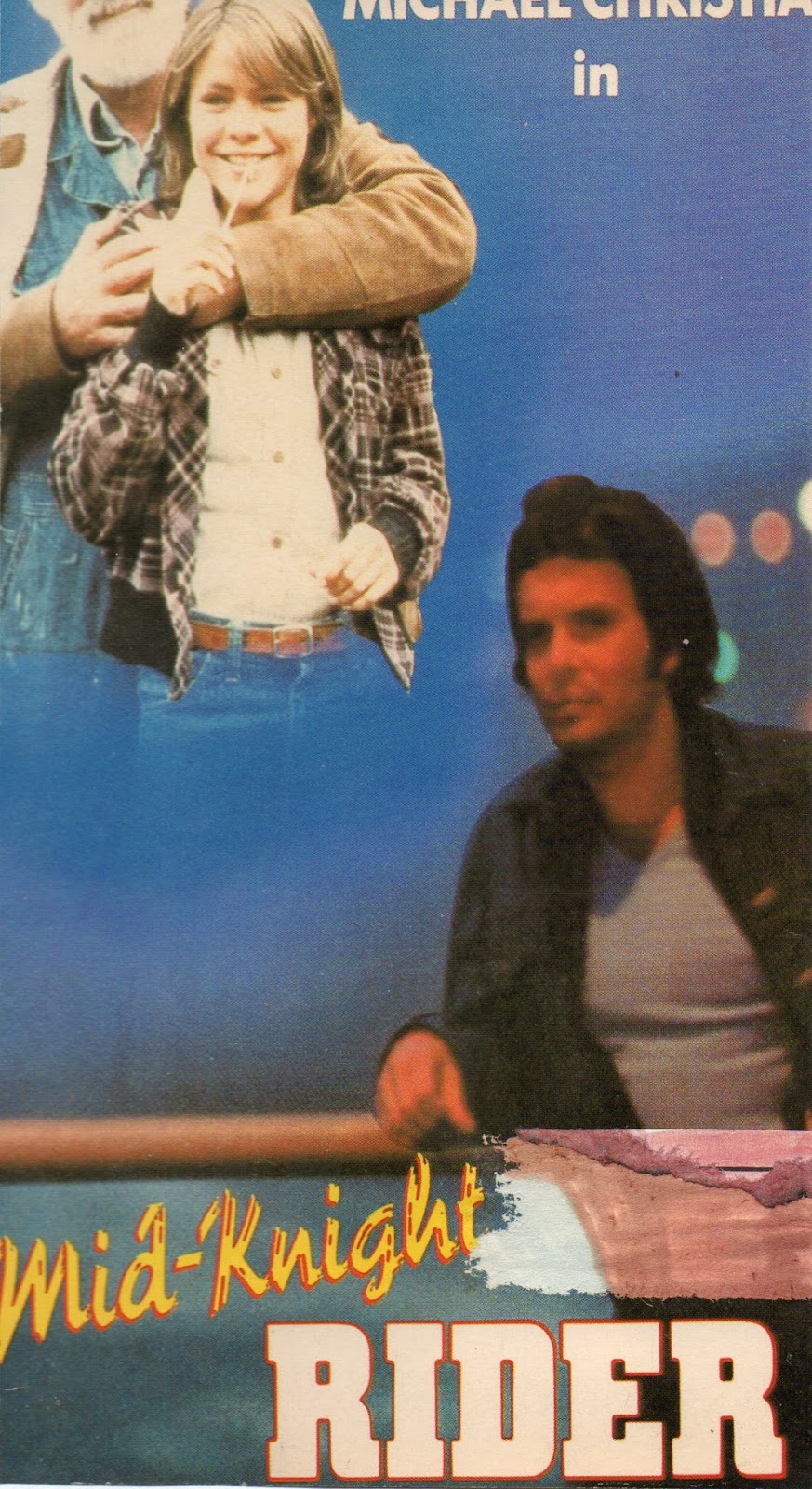 Hi, Burl here with a real curiosity for you! Ha ha, when you watch a lot of movies, you sometimes stumble across a perplexity: a movie that was made for no apparent reason at all! Who was this picture for, exactly? you ask yourself when it’s over! What particular audience could possibly have been waiting for this story to be told?
Well, ha ha, Mid-Knight Rider is such a picture! As you’re not likely to ever see it yourself, I’ll describe the story for you: it seems there’s a Hollywood gigolo named Guy who prowls the streets in his tight jeans and leather jacket, and then ladies pick him up and later give him money! Ha ha, there’s a montage of him with various naked ladies that seems to go on forever! One day Guy is picked up by a glamorous old lady, and he eventually makes his way to her palatial home, where he is given absinthe! He starts sweating and crying and eventually takes all his clothes off and runs in circles on the front lawn! Ha ha!
Next thing you know, poor sweaty Guy is tied to a bed and being burned with cigarettes as the lip-smacking old lady and her two gentleman friends have their various ways with him! Yikes! When he wakes up in the morning he goes berserk, puts a punching on everybody, then runs off! He keeps running until he arrives at a ranch run by none other than crusty old Keenan Wynn, whom we all know from such gems as Piranha and Herbie Rides Again! Wynn plays Jed, and he lives there with his teenage granddaughter Chris, played by Donna “Blood Song” Wilkes! Ha ha, it seems that Chris’s mother was struck by lightning one night on the beach, and so it’s just the two of them now!
Before you know it Guy has become their handyman, and he’s even fixing up the old motorbike in the barn! Chris develops a crush on the handsome prostitute of course, but he remains a gentleman! But soon the idyll is broken, because it seems Jed is a-feudin’ with another old rancher, the nefarious Curly! The local cops take a dislikin’ to Guy as well, and soon, after Jed is found beaten, he’s on the run again, rolling down hills, jumping off cliffs and crawling through caves, where he gets attacked by bats in a scene right out of Nightwing! Finally, raggedy and bleeding, he crawls out of the mountain only to face the maniacal Curly – but, ha ha, don’t count old Jed out just quite yet!
This one’s all over the place, ha ha! The early scenes are filled with Hollywood sleaze, and they pack a lot of full-frontal in there, and then you have the sadistic sexual torture scene; but then, when Guy gets to Jed’s farm, it’s like a pastoral family film, with plenty of waving grasses in the foreground and lots of softrocking song interludes! It gets a little more violent again by the end, with a climax that will probably remind you of the one in Explosion; but there’s still a pretty perplexing series of tonal shifts that really would end up pleasing nobody, except maybe the connoisseur of strange movies – a person, ha ha, such as myself!
There are a few familiar faces lurking in the margins of this picture, like John Crawford, whom we know from The Boogens, as Sheriff Josh – nobody calls him “Sheriff” at all actually, just Josh! Then we get Henry Brandon from The War of the Worlds as Curly, and, in the role of a flirtatious old waitress, Keenan Wynn’s co-star from The Dark, Jacqueline Hyde! Ha ha, if you’ll recall, and I’m sure you do, she played De Renzy in The Dark!
Well, there’s not much more I can tell you about this peculiar little late-70s burblenton! The actor who played Guy, Michael Christian, wrote the movie for himself, and so I guess it’s a bit of a vanity project! It’s not a very good movie, but it has a certain compelling quality, and you are rooting for Guy even if he’s a pathetic lump of a character! Even though the title is virtually unspeakable (it's also known as Hard Knocks), I’m going to give Mid-Knight Rider two theater marquees advertising Same Time Next Year!
Posted by Burl at 22:19