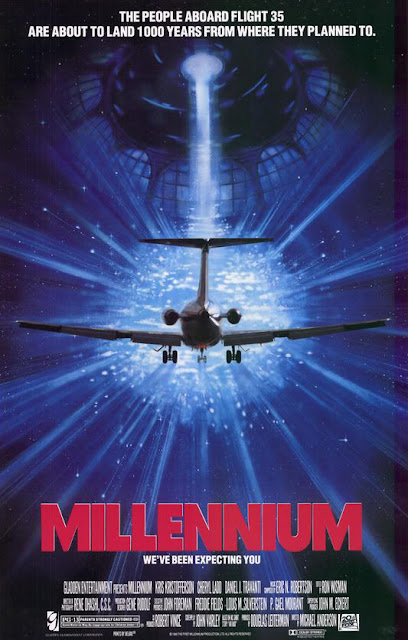 Prepare for cross check, it’s Burl! Ha ha, yes, the picture I’m reviewing for you today has to do with airplanes, though not quite so much as you may think, and at the same time quite a bit more! Does that sound confusing? If so it fits in well with the movie under discussion, which after all is a time travel piece, and those can get mighty head-scratchy! The picture in question is titled Millennium, which, ha ha, is also the name of my cat, who is also frequently head-scratchy!

That and the name are the only connections between this movie and my cat, however! It begins on an airplane captained by Lawrence Dane of Scanners fame, but it bumps into another plane and crashes! When crash investigator Bill, played by songsmith Kris Kristofferson from Pat Garrett and Billy the Kid, discovers some looney evidence among the wreckage, and repeatedly notices an attractive blonde lady and committed cigarette smoker called Louise Baltimore (none other than Cheryl Ladd, whom I remember from the 70s as being a brunette), he starts to think something’s gone bizarre! And indeed it has! We quickly learn that Ladd and her attractive co-workers are future people who beam onto crashing planes, zap the passengers into relative safety, and replace their bodies with lookalike husks! Ha ha, they don’t much explore the mechanics of all this, nor do we really learn where the passengers end up, but we get the sense that, while the future people are not evil, they’re also not completely altruistic in their motivations!

Anyway, most of the movie is Bill trying to figure things out, and accidentally zapping himself with one of the zappers the future people carry around; but occasionally we visit the future, where there’s a robot named Sherman, one of the fussy ones who affect an air of superiority while still remaining generally servile, played by Robert Joy from Amityville 3-D! There’s also an old guy called Coventry, in charge of time-travel theoretics and also responsible for warning people about paradoxes, who’s played by Brent Carver from Shadow Dancing, but who looks a little like Sting in community theatre-grade old age makeup!

In the present day of 1989, we have Daniel J. Travanti from St. Ives playing a glasses professor who’s got his suspicions about what’s going on! Ha ha, I quite liked Travanti’s performance here - he takes full advantage of those strings some people attach to their eyewear! There are also all sorts of Canadian actors in the margins of all the time periods: in addition to those already mentioned, we have Maury Chaykin from Curtains, Al Waxman from Spasms, Lloyd Bochner from Point Blank, Gary Reineke from Rituals, Eugene Clark from Land of the Dead, Michael J. Reynolds from Rolling Vengeance, Peter Dvorsky from Videodrome, and more of them besides! Ha ha, it must have been a big deal in the Toronto film acting community, this movie! And behind the megaphone we find the director of Bells and Logan’s Run, Michael Anderson!

The picture’s got some fine ideas in it (like the notion that the future people must continually smoke to maintain the air quality they’re used to in their benighted epoch), some decent time-travel stuff (I liked the scenes set in the early 1960s, especially the snazzy stewardess outfits), and a preoccupation with paradoxes you don’t find in every time travel picture! It also has an inordinate amount of blah-blah-blah, some mighty terrible trick effects, some off-putting confusions, and some moments in which the audience is well ahead of the hero in figuring things out, which is rarely a good idea in movies! Plus there’s a bit in the film in which there’s a jump forward in time (in the normal movie sense of eliding unnecessary scenes), when I thought to myself “Ha ha, thank goodness they jumped past those scenes which could only have been tiresome and obligatory-seeming despite not really being obligatory,” only to have the picture then flash back and show us all those scenes after all!

Every now and again a weird sci-fi co-production emerges from the Great Northern Dominion: The Neptune Factor, The Last Chase, and Johnny Mnemonic are all good examples, and certainly this is too! They’re usually not too successful, ha ha, and can never compete in the international market in the way they seem designed to! Millennium is in no sense a success, but it is weird and slightly compelling in its way, and it has a goofy robot in it, so I give it one and a half pillbox hats!