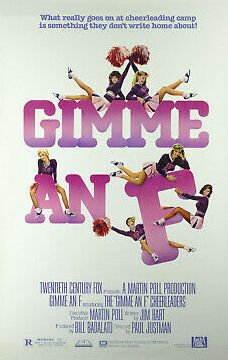 Ha ha, it’s that dancin’ fool Burl, here to review yet another movie about a cheerleader camp! It’s not Cheerleader Camp, of course, because I already reviewed that one; today’s picture, however, features all the necessary components for a cheerleader camp picture - pom poms, gymnastics, squads competing for the big prize - except the one it could have used most: a murderous killer! Ha ha! And the movie we’re talking about today sports the vaguely unsavory title Gimme an 'F'!
I’ll say right up front that this is a slightly odd one! In some ways it presents as a raunchy sex comedy: the camp is called “Camp Beaverview” (the campers eat at the “Beaverteria”), and by the third act the antagonists are being pelted with enormous urine balloons; but on the other hand, though opportunities are rampant, there are virtually no nude ladies in the film, and the plot spends an awful lot of time on the dramatic life choice problems of Tommy Hamilton, the head counselor played by Stephen Shellen from American Gothic! (In this, I think the movie believes itself to be imitating Meatballs, but it’s not a very good imitation, ha ha!)
Tommy’s problem is that he loves antics and to teach the art of cheerleading, but feels that, at twenty-five, he’s too old for both these pursuits! He’s apparently not too old to romance sixteen year-old campers though, which he just barely manages to do without committing any arrestable offences! Tommy has a girlfriend who’s displeased with him not because of the antics, but because he wants to stop doing them! (She’s also not too chuffed about the sixteen year-old!) Tommy’s flashdancing pal is Roscoe, played by Mark Keyloun from Sudden Impact, and Roscoe, whose urine fills those balloons late in the picture, is the very definition of an anticsman, so this makes it even harder for Tommy!
Aside from the counselors, we meet plenty of the cheerleading campers too! There’s an evil team, the Falcons (pronounced “faaalcon,” as Americans will do); a sweet and inexperienced team called the Molene Ducks; and, just for good measure, a team of sympathetic tough girls! Familiar faces dot all of these squads, faces belonging to the likes of Jennifer Cooke from Friday the 13th part 6, Daphne Ashbrook from Quiet Cool, Tyra Ferrell from Tapeheads and Exorcist III, and Darcy DeMoss from Return to Horror High and For Keeps! John Karlen from Impulse plays Bucky, the owner of the camp, whose constant outrage at Tommy and his antics is perfectly within reason! It’s that Ghostbusters thing: the villain may be a jerk, but he has a solid point nevertheless!
Bucky is trying desperately to impress a group of Japanese investors led by the always-enjoyable Clyde Kusatsu from In the Line of Fire and Godzilla! And yes, this group is always introduced with the bonging of a gong on the soundtrack! Classy move, Gimme an 'F'! Meanwhile Roscoe falls in love with a member of the Faaaaalcons, and to impress the surly object of his affections, he delivers chocolates and swings down from trees, but is only made the guest of honor at a slap party for his troubles! In an extreme of desperation he dresses like Wez from The Road Warrior, and surprisingly that is what works!
After performing a long underwear dance in the shower, Tommy makes an ill-advised bet with Bucky that the Ducks, a meek bunch of klutzes, can beat the fearsome Faaaaaalcons in the big final competition all these camps seem to have! (The performance scenes seemed to me ridiculously elaborate productions for a modest sleepaway camp!) No prizes for guessing that the Ducks transform from goodie-two-shoed stumblebums to sexy professional dancers in a matter of days, and the pee-soaked Bucky loses both his bet and his sanity!
Gimme an F seems like a movie made by strippers and pornographers who, jaded by years of exposure to skin and sex, get their biggest thrill from clothing being left on! Ha ha! It was written by Jim V. Hart, whose next credit would be Steven Spielberg’s Hook, another movie with weird tonal shifts! The filmmaking is nothing to write home about, and while there are some impressively athletic performances, the lack of charm in the leads is everywhere evident! They come off as a bunch of jerks: Bill Murray could prank Morty in Meatballs and not seem too mean about it, but these guys can’t even fire a pissbomb at a nasty crank without coming off as despicable! Ha ha, Gimme an 'F' is a pretty poor and forgettable movie and I award it one locker room flashdance!