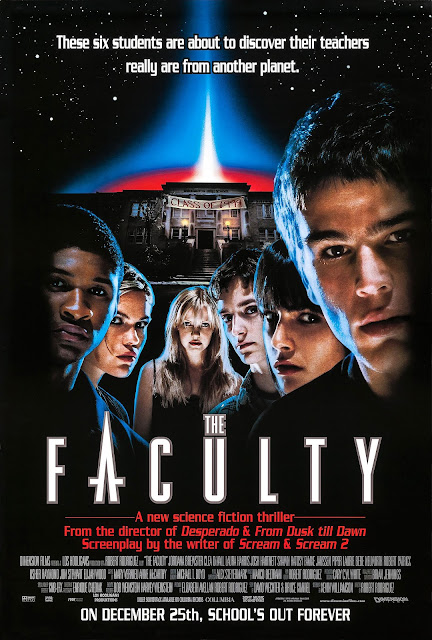 Saved by the bell, it’s Burl, manfully attempting to review a very, very, very 1990s horror picture! It’s maybe not the most 90s horror movie – that might be Scream or I Know What You Did Last Summer, or one of those sorts of things – but the very, very and final italicized very still apply! After all, it was written by that meta-horror specialist Kevin Williamson, directed by 90s wunderkind Robert Rodriguez, and produced by that slab-lipped, pock-faced date-rapist Harvey Weinstein, so after all, it’s pretty 90s! It’s The Faculty!

Our setting: High School U.S.A.! As in Dazed and Confused, there are different groups: jocks, criminals, brainboxes, and a put-upon freshman (not played by Wiley Wiggins, but Wiley is in the movie, ha ha, lurking in the margins), and foot-ball is the local religion! In the opening sequence we see the iron-nosed foot-ball coach, played by Robert Patrick from Die Hard 2, being approached by… something; then the coach, now possessed by… something, stalks Bebe Neuwerth in the role of the school principal; and the principal seems to be saved when she runs into colleague Piper Laurie from that classic high school picture Carrie, but then Laurie turns into… something!

So, something’s clearly up at this high school, ha ha! The student body includes Elijah Wood as Casey, the oft-abused nerd; Clea DuVall from Ghosts of Mars as Stokely, the tough loner girl; Laura Harris from It putting on the mint julip as Marybeth, the new Georgian transplant; Josh Hartnett from Halloween H20 as Zeke, an insufferable jerk who sells homemade drugs to the younger kids; and a few others, including a quarterback who may not want to play foot-ball any more, just like, again, Dazed and Confused! It seems to take an age, but eventually these characters get together and face the threat, which is the same sort of parasitic takeover aliens we saw in The Puppet Masters!

Because this was written by the same fellow who wrote Scream, it’s packed with winking meta-humour and would-be cutting edginess! It’s trying its best to be a hip and with-it high school version of The Thing, but mostly it’s trying too hard! It wants to give the same sense of pod-people menace as in Invasion of the Body Snatchers, but there’s rarely if ever any question about who’s who, and in any case, once the parasite leaves the host, the people come back to normal! So it’s not very scary or particularly disturbing, and it's packed with mediocre music, or mediocre covers of good music; but the picture stays afloat with a cheerful 90s-ness that makes it an artifact of its time, and a reasonably entertaining one at that!

And the cast is strong! The faculty itself includes Salma Hayek from Desperado as the school nurse; Famke Janssen from Goldeneye and Deep Rising as the shrinking violet teacher; and people like Jon Stewart and Daniel Von Bargen; and Christopher McDonald from Grumpy Old Men plays Casey’s dad! It’s a very derivative movie, but it’s frequently fun and occasionally gory! I hated the character of Zeke and was glad to see him suffer a terrible public humiliation, but mostly the picture is a good-natured romp in the classic 90s style, so I give The Faculty two collapsing bleachers!