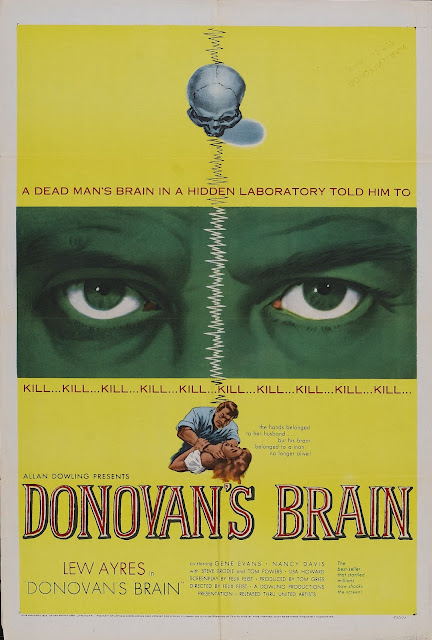 With a glowing and a pulsing and a ha ha ha, it’s Burl, sending out brainwaves to be received by anyone in the vicinity! Yes, it’s time for me to catch up with a sci-fi classic of the 1950s, a picture I’ve always heard is good but never had a chance to see before now, or never took the chance because after all there were, so far as I was aware, no giant insects or aliens in it: Donovan’s Brain!

It’s based on a novel by the fellow who brought us The Wolf Man, Curt Siodmak, and its status as an Old Chestnut comes both from the basic and nearly primal obviousness of the concept, and how many times it’s been adapted for the screen, which is several! Because this version shares the title with the novel it comes from, and hews most closely to its story, I guess it’s considered the definitive one! Lew Ayres, whom we recall fondly from ‘Salem’s Lot, plays our – well, not hero, but main character, Dr. Pat Cory, a scientist pursuing, with a dedication just shy of obsessive, a project of extracranial brain revivification! He’s assisted in this by his wife Janice, played by Nancy Davis (that is, Nancy Reagan, ha ha!), who seems to be a scientist in her own right, but of course is always the one who has to go off and make the coffee when the men get sleepy; and a doctor called Frank, played by Gene Evans from Pat Garrett and Billy the Kid, who serves as the moral barometer and is also a thoroughgoing inebriate!

One day there’s a plane crash in the vicinity, and the only survivor, a nasty, selfish, evidently libertarian millionaire called Donovan, is brought in to the ranch house laboratory! Well, he can’t be saved, but Dr. Pat, against the protests of Janice and Frank, pulls out his brain and puts it in a fishtank! Soon the brain is pulsing and glowing and increasing is size, and it begins sending out brainwaves and eventually takes over the mind of Dr. Pat! The doc begins walking with a limp and holding on to his kidneys, which were Donovan’s signature moves, and also starts treating people with incredible curtness: another Donovan characteristic! The wicked millionaire seems not the least fazed that he’s just a brain in a tank, and, through Dr. Pat, resumes what was evidently an ongoing curriculum of villainy!

Donovan’s evil plan revolves around boring financial moves and seems mostly to involve him writing a lot of cheques, or taking other people to task for cheques they’ve written in the past, or compelling these same people to write more cheques to some hazy purpose! After the third cheque-writing montage, it not only ceases to be compelling, but makes you realize it never was in the first place! Ha ha! Maybe this kind of thing works better in print, but it seems to me that in adapting the book the screenwriters might have come up with something a little more spectacular for the brain to be getting up to! Maybe he was cooking up a plan to put lead in gasoline or something like that!

Compared to most 50s sci-fi it’s a mature and adult work, but the closest it has to a special effect is the pulsing brain, and as I watched, in the company of a pair of bored-but-game ten year-olds, it should be noted, I came to realize that it was not merely a lowbrow impulse that had me avoiding the picture all these years! Ha ha, it really is a bit on the dry side, and by the second half of the picture – which seems a lot longer than its 84 minutes – I couldn’t help but notice and deplore its lack of monsters! On the other hand, as noted, there’s something appealing about a movie of this type that makes no concessions to the more juvenile viewer, and, too, the acting is unusually strong! Ayers in particular is good, rarely overplaying the Donovan takeover aspect, and maintaining an admirable consistency throughout!

There are solid craft credits too – the photography is by Joseph Biroc, who had a long and glorious career behind the camera, and gives the desert locations a nearly Jack Arnold-level starkness; and the production design is by Boris Levin, who was later designing movies like New York, New York and other Scorsese works! The script and direction is reasonably tight, but that doesn’t improve the movie’s main problems: its stubborn lack of eventfulness, and the hopelessly confounding scheme of the baneful cerebellum! Yes, it’s as intelligent as you would hope a brain movie would be, but cinematically speaking it could be so much more clever! I give Donovan’s Brain two inflating medulla oblongatas!