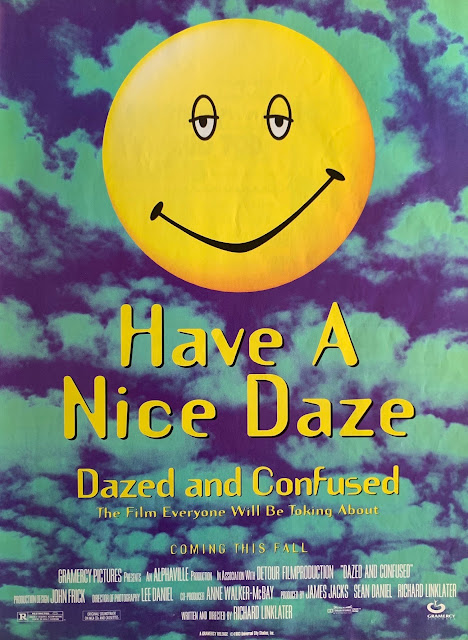 A happy Bicentennial to you, from me, Burl! Yes, I’m here to review a picture not made in, but rather set in, the American bicentennial year of 1976! Unlike many another period picture I could name, this one sets itself in its chosen time with the utmost conviction and credibility! Yes, it’s none other than Richard Linklater’s sophomore exercise in filmmaking, in which he tells a tale of not just sophomores, but of seniors and freshmen too, in a picture called Dazed and Confused!

Linklater’s earlier film Slacker is a great favourite of mine, and it’ll probably come as no surprise that I dig this one too! Ha ha, I find it endlessly rewatchable, and a most groovy updating of the Crown International pictures of the 70s, principally The Pom Pom Girls! And of course he followed it up later with the “spiritual sequel” Everybody Wants Some!!, and that was enjoyable too!

Anyway, we know where we’re at here: High School U.S.A., somewhere in Texas, on the last day of school, 1976! It’s an ensemble piece with different groups of students: the soon-to-be seniors doing their end of year shenanigans, and the middle schoolers on their way to becoming freshmen! The big activity for the older kids is to find the freshmen and humiliate or beat them in some way, and this is where the picture seems to me a document from some alien culture, because where I grew up, we had nothing like this at all! Ha ha, nobody around here cared about foot-ball or paddling kids on the fandini, but in this Texas town it’s an overriding and all-consuming obsession!

Luckily there are other obsessions too, like drinking beer and smoking weed! Those I can relate to, ha ha! And of course there are the cars, which are fantastic – the opening shot is a real dream for casual lovers of the 70s muscle car - and the music, which is not necessarily what I might have listened to if I was in high school in ’76, but is entirely the right stuff for this picture! I don’t think Linklater got exactly the music he wanted, but he did pretty well!

Linklater did a lot of things right with this movie, but one of his greatest accomplishments was assembling this cast! And I’m not just talking about the guys who became really famous, like Matthew McConaughey (from Texas Chainsaw Massacre: The Next Generation) as the chickenhawk Wooderson, or Ben Affleck (from Gone Girl) in the role of the overall-clad bully O’Bannion! No, the whole cast is good, or at least ideal and effective, in their roles: Adam Goldberg from The Prophecy as one of the more intellectual students; Sasha Jenson from Halloween 4 as a playful jock; Milla Jovovich from Two Moon Junction in a near-silent role as a decorative girlfriend; Wiley Wiggins from Computer Chess as the main frosh on the run; Parker Posey from The Daytrippers as a bitchy, demanding senior; and Nicky Katt from Gremlins as a violent greaseball!

Ha ha, one of the few places where the movie falters is in trying to have a tiny scrap of a plot: something about a foot-ball player pressured to sign some kind of pledge form and deciding whether or not he even wants to play foot-ball at all! Otherwise the picture is mostly a series of highly entertaining vignettes which occur over the fifteen hours or so covered by the picture, giving equal weight to the concerns of the jocks, the stoners, the brainboxes, the proto-teens, the second-wave feminists, the ex-hippies, and more! (Ha ha, I’d have liked some art-punks in there, but you can’t have everything!) Even if you weren’t around or fully sentient in 1976, the odds are you’ll connect on some level with the goings-on: coming in so late from a night out that it’s early, for example; or fighting a bully; or scoring beer when you’re still under eighteen; or smoking your first joint! The picture never makes a big, After School Special-type deal out of any of this, but treats it with just the sort of nervous, pleasurable excitement I remember feeling myself!

It’s a tremendous sophomore feature: not perfect maybe, but nearly that! I enjoyed it in the theatre and have enjoyed it every time since, and plan to enjoy it further in the future! Yes, Dazed and Confused is one of the good ones, and I’m pleased to give it three and a half green things every day!