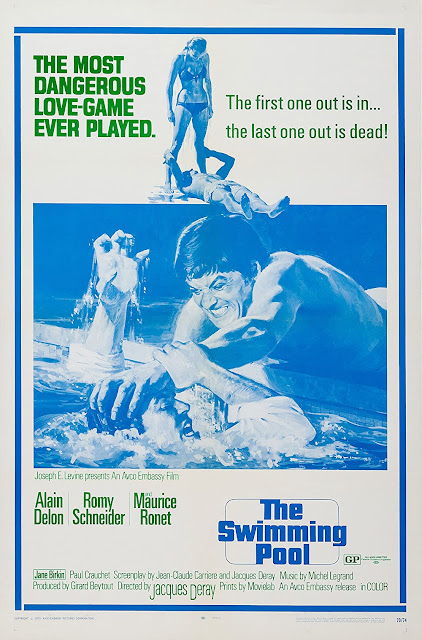 Hé-ho, c’est Burl, here to review a film about the very French! Yes, I’m languorously languishing on a chaise longue on the Côte d'Azur, most of the buttons on my white cotton shirt undone, Ray-Bans in place, Gauloise between my fingers, thinking inscrutably existential thoughts! Ha ha, the scenario I’ve just described applies with some frequency to the movie I’m discussing: La piscine!

Our setting is an estate just up the hill from the seaside, equipped with a lovely swimming pool and some spectacular views! Living here, though not themselves the owners, are a couple, Jean-Paul, played with typical handsomeness by Alain Delon from Un Flic, and Marianne, essayed in a more relatable performance by Romy Schneider from Purple Noon! They’re on vacation and have borrowed the house from acquaintances, and seem to be having a pretty romantic time of it, ha ha!

But things change when their pal Harry roars up in his peppy sports car! Harry, played by Maurice Ronet from Elevator to the Gallows, is an old friend of Jean-Paul’s, but also an ex-lover of Marianne’s, a history to which he constantly, winkingly refers! And he’s brought along his shrinking violet daughter Pénélope, played with extreme gorgeosity by Jane Birkin from the similarly sunny Evil Under the Sun! For a while this arrangement trundles along, with the quartet eating dinners, sitting around the pool, and so forth, and there’s even a brief party!

With its Mediterranean locations, beautiful people, and virtually the same cast, it strongly recalls Purple Noon, the more so when, eventually, there’s a murder! I won’t give things away, because part of the fun is the slow burn, during which you’re watching tensions and awkwardnesses ramp up slowly at first, and then quickly, and you wonder how exactly the tension is going to release! It’s not a suspense picture, nor a mystery, but both of those qualities are present, even if not in a form familiar to the fan of the detective genre!

There is a detective, though! Paul Crauchet from Un Cercle Rouge turns up late in the picture as L'inspecteur Lévêque of Marseille, and he conducts his investigation with apparently all the craftiness of, say, Alastair Sim in Green For Danger, but with none of the results! Ha ha! There was something very realistic but also strangely laissez-faire about his police work, and I liked what that brought to the picture!

And I liked the relaxed continental pace of the movie, the wonderful décors, the contrast between its sunny look and its dim outlook, and, if I didn’t care much for the characters themselves, I appreciated what the actors brought to them! Everyone was good in their roles! When we learn that Jean-Paul has had some emotional problems in the past, and even tried his hand at suicide, Delon’s performance makes a little more sense; and the character of Harry is someone that we’ve all met in the past! And, ha ha, Birkin’s character is the most hilariously disaffected of all, despite not herself being French! Yes, as a slice of late-60s French Riviera life, the picture is nonpareil, though for some I suppose it will be too slow and uneventful! Me, I give La piscine three bottles of Johnny Walker Red!