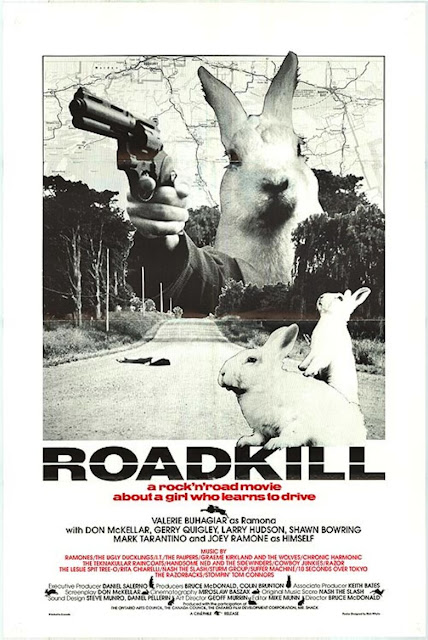 Beep beep, it’s Burl, here to bring you a road movie! Now, ha ha, road movies are a thing I like – in fact, I sort of made one myself once! And I’ve always enjoyed pictures like Wenders’s Kings of the Road and Bergman's Wild Strawberries and Capra's It Happened One Night and Reiner's The Sure Thing! Of course Canada, being so big, has made its share of road pictures, and in the proud Canadian tradition of Goin’ Down the Road, here comes Bruce McDonald’s first feature, Roadkill!

It’s a little black-and-white picture with an appealingly homemade quality! Our heroine is Ramona, played by Valerie Buhagiar from Johnny Shortwave, and she's a mild-mannered intern at a Toronto rock promotion company! Her psychotically truculent boss Roy, essayed by Gerry Quigley from eXistenZ, orders her up to northern Ontario to search out a rock band, the Children of Paradise, who’ve turned up missing in the middle of their tour! Last known location: Sudbury! Ha ha, remember Between Friends? Or Corpse Eaters? Sudbury!

An important point is that Ramona can’t drive, so she has to figure out how to get from Toronto to Sudbury, and she ends up in a cab driven by a garrulous stoner filled with tales of driving rock stars into adventures! She finds three quarters of the Children of Paradise easily, and their drummer, the sleepiest guy ever, is played by Earl Pastko from Heads; but after telling her their frontman Matthew has disappeared on a vision quest, they ditch Ramona and point their dirty van deeper into the wilderness! But Ramona will not be deterred from her quest to round them all up, and she follows, learning along the way both to drive and to assert herself!

There’s a natural episodic quality to a road movie, and Roadkill leads with its chin right into that structure! The episodes are framed around the different men Ramona meets on her journey: first the cabbie; then a documentary director played by McDonald himself, who was looking for the band but now wants to make his own movie with Ramona the star; then Russel, an aspiring serial killer played by Don McKellar from the new Cronenberg picture Crimes of the Future (but not the old Crimes of the Future!); then a wandering ice cream man who turns out to be the missing Matthew; then a smiley fifteen year-old with whom Ramona dances at a headlight party held at the local drive-in!

I won’t say what happens at the end, because it’s fairly surprising, but I will reveal that it involves Roy the perpetually shouty music promoter, and a load of blood capsules and bullet squibs! And then, ha ha, one of the film’s greatest coups: a surprise cameo appearance from none other than Joey Ramone, who plays probably the only role he could ever play, himself, just as he did in Rock n’ Roll High School! He’s got more dialogue here than he did in the Arkush picture, so those who love Joey’s mooshy newyawk speaking voice are in for a treat, ha ha!

Of course McDonald would go on to make more road pictures after this: Highway 61 and the great Hard Core Logo, and I hope to review both of those in the not-too-far-off future! It’s all superb Canadiana for those who appreciate that niche, and I recommend this loose trilogy with all possible earnestness! Roadkill is not the best of them, but it's good – it can be a bit rough around the edges, a bit precious, and I wasn’t wild about the little flattened critters, but hey, just look at the title! Can't say I wasn't warned! It’s got many a great little moment and it’s set in a world I find highly recognizable, so on the whole I enjoyed it tremendously! And I also appreciate that after the movie won an award for Most Outstanding Canadian Film at the Toronto International Film Festival, McDonald told everybody in his acceptance speech that he would spend the prize money on a big chunk of hash! Ha ha! I give Roadkill three tape decks and a good supply of dope!

Email ThisBlogThis!Share to TwitterShare to FacebookShare to Pinterest
Labels: 1980s, Canada, comedy, coming of age, road trip, saw it on the big screen