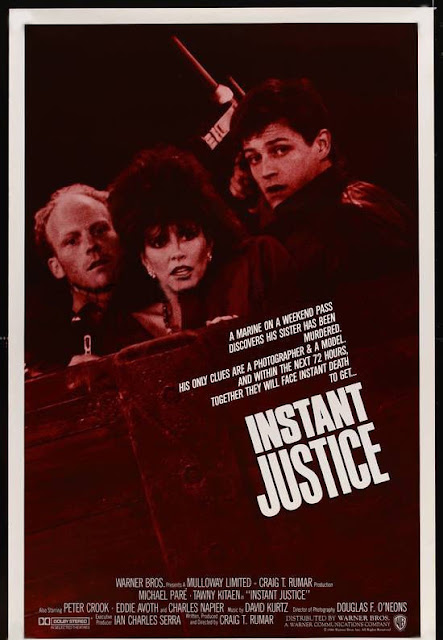 Bang bang, it’ Burl, here to review a little manchego-flavoured mid-80s action for you! Ha ha, here’s yet another one of those movies that appeared on video shelves in the wake of Rambo: First Blood part II – pictures like Steele Justice or Born American or The Patriot or any number of others, in which a U.S. military tough guy exacts some payback in the name of Uncle Sam, or at least in the spirit of that personage if not with his official sanction! This particular variation on the theme is called Instant Justice!

As just about every viewer points out, nested as it is within a movie over a hundred minutes long, the justice here is far from instant! It does come eventually though – sort of! Our principal justice seeker is Sgt. Youngblood, who’s stationed in Paris, and in the opening moments of the picture manages to save a jogging ambassador from a pretty amateurish assassination attempt! Then he gets a call from his sister Kim, who’s apparently a high class professional party girl in Madrid, and during the call he gets the feeling his sister is in some kind of trouble! This proves true, for by the time he gets to Madrid, Kim is dead with cuts all over her face! Yowch, time for instant justice!

Sgt. Youngblood is played by Michael Paré with an absolute minimum of expression, inflection, and what we humans call “life!” Ha ha, Paré, is even more robotic here than he was in Streets of Fire or The Philadelphia Experiment, and though he does get pretty barky with the other characters, it still seems a little synthetic, like he's expressing an emotion he's heard about but never felt! The characters on the receiving end of his abuse include a fiveheaded photographer called Jake, who was a friend of Youngblood’s sister and who gives the Sarge the rundown on the picture’s baddies! These heavies are a Raul Julia-voiced bossman called Mr. Silke, and his nattily-dressed henchman Mr. Dutch, who was the party directly responsible for Kim's demise! Jake is played by Peter Crook from Bird, and he gives off a sort of combination Peter MacNicol/John Malkovich vibe that I thought improved the picture markedly!

The authorities are no help, of course: after the gun which Youngblood’s buddy in Paris inexplicably stashed in his luggage is taken away by airport security, and Youngblood has to be rescued by local officer Major Davis, he explains his problem and yells “If you can’t help me, WHO DA HELL CAN?!?” at a recalcitrant policeman! Youngblood gets into punchfights everywhere he goes, makes impolite demands of Jake, and eventually meets enormous-haired Tawny Kitaen, whom we recall from Witchboard and Bachelor Party, playing Virginia, another party girl in the sleazy employ of Mr. Silke! Jake, Virginia, and Youngblood ultimately form a team in opposition to the evil Silke/Dutch duo, but not without a constant stream of monotonic, monosyllabic haranguing, demanding, and guilt-tripping from Youngblood along the way!

Major Davis is played by the great Charles Napier, whom we know from several Russ Meyer pictures and even more Jonathan Demme films, like Last Embrace for example! Of course he was also in Rambo, which is no doubt why they wanted him in what amounts to the Richard Crenna part in this one! And of course, in accordance with Spanish law, there’s an appearance from Luis Bar-Boo, whom we know from Conan the Barbarian and so many other Spanish-shot pictures!

It’s a medium-cheap picture, but the Spanish (and apparently Gibralteric) location work helps it out! Ha ha, for such an all-American yankee-doodler (“The boldest, brashest, All-American movie this side of basic training,” according to the VHS box copy), the movie sure has a European flavor to it – I think even the director is French! I was glad for that, though, and as someone who has actually been in a bullfighting ring with a bull, I appreciated the scene where Jake helps Youngblood evade some authorities by releasing a pack of angry bulls!

There are lots of punchfights, but the action scenes are generally pretty rote; and the ultimate fate of Mr. Dutch – he’s driven into an airplane propeller while riding the hood of a yellow Trans-Am - is conceptually interesting, but ineptly staged! It could use more pep and style (or any style, actually!), and the acting and dialogue is mostly foul! It’s altogether typical VHS fodder from the 80s, but especially dumb in parts, and so I give Instant Justice one clothed shower!