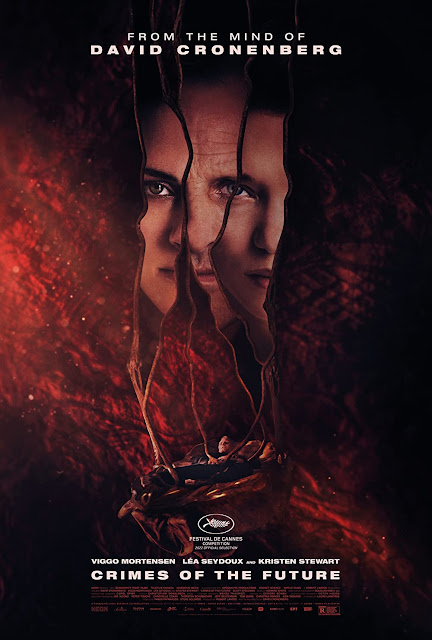 By the power of Rubbermaid, it’s Burl, here to review a brand-new David Cronenberg picture! Ha ha, for a while there I thought I’d never get to type those words, as it’s been some years since his last movie, Maps to the Stars, and I thought maybe he’d hung it up for good! But no! Here’s Canada’s beloved King of Venereal Horror back at it again with what amounts to a strange little Greatest Hits piece entitled Crimes of the Future! And what a pleasure it was to head out to the mall multiplex on a hot summer’s evening with my good old dad to see it! No, you don’t get to see a new Cronenberg movie in the theatre every day, ha ha!

Of course Cronenberg has already made a movie called Crimes of the Future – it was his second mid-length effort, sort of a companion piece to, or an echo of, Stereo! But this new one is something a little different – not at all a remake, though it does share some commonalities with that earlier artwork! This new picture tells the tale of a pair of performance artists, Saul and Caprice, whose performances revolve around the curious new organs Saul’s body spontaneously produces, and the surgical removal of same!

It’s all set presumably in the future, but in this picture the future looks a lot like the grimier regions of Greece! Viggo Mortensen from The Prophecy and several other Cronenberg pictures, like A Dangerous Method, plays Saul, and his performance seems made up in equal parts of coughing, gagging, hacking, horking, and sighs! Léa Seydoux from No Time to Die and Midnight in Paris is Caprice, who, like most people in this crazy world, no longer feels pain, and regards surgical invasion as an enticing new form of sex! Ha ha!

Scott Speedman from Kitchen Party plays a bereaved father who leads the local cell of an underground movement of plastic-eaters; his son, perhaps the world’s first natural-born plastic eater, meets a sticky end in the picture’s opening moments! But he plays a pretty big part in subsequent events, as does the general habit of plastic eating! The authorities, represented here by a cop with a boil on his belly, are frightened by the plastic eating, and believe that such an evolutionary step is unauthorized and inadvisable, while the plastic eaters themselves think they’re the only possible solution to a world being steadily polluted by plastics! We’ve come a long way from The Graduate, ha ha!

In part, of course, the picture is about the crimes we are committing against the future, and a warning that the future is likely to commit crimes right back! And my feeling is that Cronenberg is fully on the side of the plastic-eating “criminals” in this case, but since they don’t exist, the true underlying message of the movie from its 79 year-old director is something in the line of “Ha ha, best of luck, everybody!”

And as I say, and as every other critic says too, the picture is very much a greatest hits package! We’ve got the belly slits of Videodrome, the underground fetishists of Crash, the interior beauty pageants of Dead Ringers, the organic machines of Naked Lunch and eXistenZ, even the toxic saliva of The Fly! I didn’t consider any of this to be lazy repetition or fan service or anything like that – for me, who’s been watching Cronenberg movies since he exploded (ha ha!) into my field of vision with Scanners in the early 1980s, it was just pure comedic pleasure! I can’t say this is my favourite Cronenberg picture (Videodrome will probably always be that), but I certainly enjoyed it! Those similarly predisposed should run out and see it if they haven’t already, secure in the knowledge that I’ve given Crimes of the Future three goofy breakfast chairs!