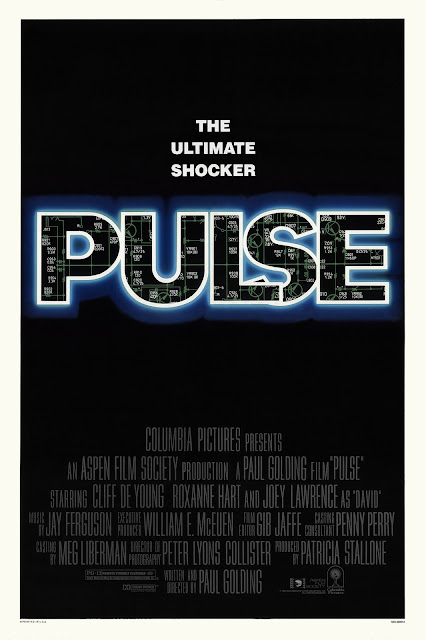 Bzzt bzzt, it’s Burl! Yes, I’m going back to the 80s horror well today, reviewing a picture that’s well-regarded by aficionados of the form! It’s one of those so-called “safe horrors” with which the decade was so generously supplied, and it’s a PG-13 joint in the bargain, with an eleven year-old hero! It all takes place on a Spielbergian suburban street, and features a premise Stephen King might have rejected as too obvious! Ha ha, the picture is called Pulse!

It begins with suburbanite Bill, played by Cliff De Young from F/X and Secret Admirer, woken in the night by a kerfuffle across the way! It seems the mean old man across the street has gone nuts and is breaking up his house! The next day Bill’s son David, essayed by wee Joey Lawrence from Summer Rental, arrives for an extended summer visit and is welcomed with open arms and a racing-themed bedroom by Bill and his new wife Ellen, a non-wicked stepmom played by Roxanne Hart from Highlander!

It takes a little while, but weird happenings start to become evident! With the parents away, David tries to watch the ballgame, but all the blobs of solder in his TV go crazy and he’s reduced to listening to the game on the radio instead! Later a gas main breaks while David is trapped in the garage, and he’s nearly suffocated! Ellen begins to believe David’s assertion that something uncanny is happening with the utilities, but Bill, a staunch realist, refuses to accept it, and his position is backed up by the tradespeople who periodically come by to check things out! These are played by the likes of Damone from Fast Times and Joe from The Annihilators, and they offer boring explanations which only further convince Ellen and David that something supernatural must be afoot!

Meanwhile the kid next door, a walking bowl cut called Stevie played by Joey’s brother Matthew Lawrence from Planes, Trains & Automobiles and Tales From the Darkside: The Movie, gives David the lowdown on the mean old man across the way! And a weird old duck played by Charles Tyner from Best Seller pops up with dire warnings about an evil electrical pulse that makes its way from house to house! There’s also a subplot involving a VHS tape of Starman, which I’ll confess I didn’t really understand, but all this sets the scene for a shower scalding, and then David and Bill, now at last a team, wage a final battle with the hydro, the plumbing, and the natural gas!

As I say, this is a fondly-regarded movie, but I’m not entirely sure why! It’s well produced, with nice photography, including lots of macro images of crazed solder blobs, and good physical trick effects; but things never get as creepy as they should! The provenance and motivations of the dreadful pulse are never revealed, and that’s fine; but the ambiguity is not in the service of unease the way it ought to be! It also takes a while for things to get going, and the movie feels weirdly trapped on its one street location, and not in a way that increases the feeling of peril and imprisonment!

Still, the cast is good and it’s slickly made, and there are a few moments that might have you eyeing your own utilities askance! It’s similar in many ways to Bells, though with a supernatural rather than a revenge-based explanation, and like that picture it could have used a bit more pep! I certainly didn’t hate it, though, so I give Pulse two racecar beds!