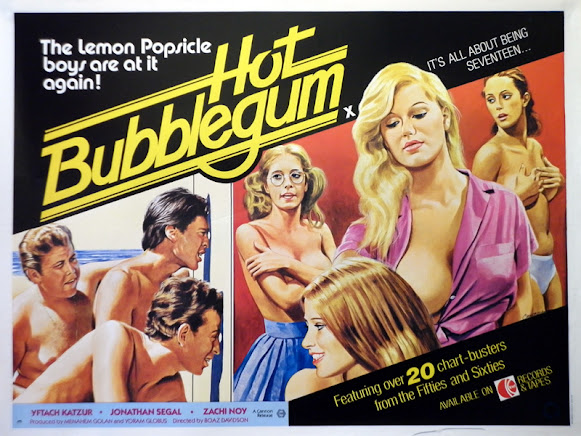 Ya-da-da-da-da-da la bamba, it’s Burl, reviewing for you some Israeli teen sex comedy! Ha ha, the teen sex comedy was not born in Israel of course – there were American pictures like The Cheerleaders that came earlier – but it could be argued that the Holy Land’s Lemon Popsicle series of films codified the genre and put it into a shape that would become all-too common through the late 70s and well into the 80s! This one, the third in the series, is called Hot Bubblegum!

Boaz Davidson, who went on from this directly to Hospital Massacre, and thence to The Last American Virgin, which is nothing more or less than a Stateside version of a Lemon Popsicle picture, was the director of this one! It starts with a bang, introducing us to the central trio of idiots: Yftach Katzur as the ratfaced Benji; Jonathan Sagall as Bobby, the allegedly handsome one; and of course Zachi Noy as Huey, or Yudale, the ducktailed slobbo! There’s also a skinny little glasses nerd called Victor, but he doesn’t figure in much as the picture wears on!

Anyway, these three, plus occasionally Victor, are up to their usual hijinks, which in this case is spying on ladies changing in a beachside structure, and of course Yudale plunges through the roof and hits the floor with a grotesque slapping sound! Then a lady pummels him with a shoe and calls him a sex maniac – not the last time this will happen to Yudale in the movie, and for good reason – and he runs and jumps into a big hole dug in the sand, which his friends immediately fill up, trapping him like the unfortunates in Creepshow! Then a little kid pees in his face, ha ha!

Back in the old VHS days, my pals and I loved these opening scenes! We thought the movie was a real piece of work, and our nickname for the main character, Benji, was “Ratatouille!” Indeed he is quite a ratboy, and it’s hard to understand why the local girls seem so intent on dating him! The slim narrative through-line of the picture is Ratatouille’s inability to decide between committing to his sweet freckleface of a girlfriend Doris, or to carry on with the gap-toothed partygal Nikki! Why either one would give him the time of day is the picture’s great mystery!

I’ll tell you, these three guys are real jerks, and everything they do is some form of sexual assault! They’re peeping toms, they spike drinks, they lie, cheat, misrepresent in their neverending quest for bohankie; and when they’re called out on all this criminal dishonesty, they get pouty and surly, or at least Ratatouille does! He’s the pettiest, jerkiest, most childish character in a movie chock full of them, and greasier than a duck’s underwear too; and his dad, the old perv, is no better! The scenes in which a pulchritudinous cousin comes to stay with the family are cringy enough to cause cramps!

I’ve seen a few other Lemon Popsicle movies, namely Baby Love, Going Steady, and the army one, Private Popsicle, but can hardly recall a thing about them! I assume they’re equally off-putting, however, and probably don’t even have the microscopically small redemptive moments we find here, like the characters getting peed on in the face, or landing painfully on concrete, or whispering "a-doobee-doo" in each other's ears! Ha ha, re-watching this one (which took three or four viewing sessions, so gruelling was the experience) did not make me eager to have another look at any of the others! Maybe the first one, Lemon Popsicle, would be interesting to see for historical purposes, but on the other hand, probably not!

It’s not surprising to find in the opening credits that the English language soundtrack was supervised by Mel Welles, who of course played Abu Habib Bibubu in Smokey Bites the Dust! The soundtrack is chock full of Welles-isms, and several of the voices, especially the father, sound like old Mel must have performed them himself! Ha ha, he sure loved to do his Old Jewish Guy voice! It’s hard to fathom how this early Cannon work could have afforded to license the wall-to-wall hits that are constantly playing in the background (it’s the best use of “La Bamba” outside of Birdy, I have to admit), but maybe they just didn’t bother with all the technicalities, like the asking and the licensing and the paying! Ha ha, that’s Golan and Globus for you, I guess!

This is one stinky movie, but for the laughs it gave my friends and I back in the 80s, I guess I have to give it some small credit! Watching it now as a grown-ass man was a painful experience, however, and I don’t recommend it to anyone! It also manages to make the act of looking at nude ladies actively unpleasant – not because there’s anything wrong with the ladies, but because of the context and the way the scenes are shot! And there’s not much of that here anyway, so nude lady enthusiasts are encouraged to look elsewhere for their fix! In the meanwhile I’m going to award Hot Bubblegum one half of a pathetic shoe mirror!
Posted by Burl at 09:34