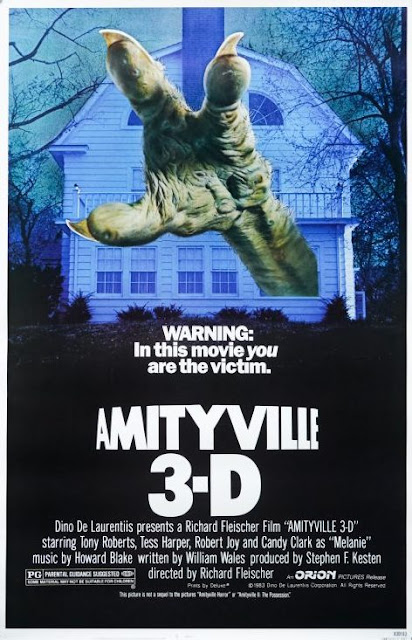 Ha ha and picture windows, it’s Burl, here to talk haunted house sequels! Yes, it’s one of the Amityville pictures today, one I have a very specific memory attached to! Ha ha, I have specific memories attached to several of these movies, as it happens: when I was very young, a kid in my class had a birthday party to which everyone but me, it seemed, was invited! They all went to see The Amityville Horror, and the next day at the lunch table were all talking about how scary it was! Then, a few years later, my friend Dave and I went to see Amityville II: The Possession in the theatre, and that one, with its mixture of incest and demon possession and matri-parri-fratricide would surely have been a heady brew for a pair of 11 year-olds!

The devil’s fondness for the Dutch colonial building style is well documented, ha ha, and so today’s picture is Amityville 3-D, which I saw once again with my friend Dave! We biked to the video store one humid July day, rented this movie, and then got caught in a massive, pounding summer storm while biking back to Dave’s place! We later learned that some poor soccer player had been struck by lightning during that storm, yikes!

Well, the other day I revisited this picture, which of course builds on the malarkey presented by that Lutz family who made up that whole haunted house thing in the first place! This tale, in contrast to the first two movies, is entirely fictional instead of only 99% fictional, ha ha, and involves Baxter, a professional magazine skeptic played by Tony Roberts from Annie Hall, who, after debunking a pair of fake spiritualists who’ve been using the place as their base, decides to purchase the rambling Long Island spookhouse for himself! How Baxter does this on a magazine writer’s salary is left to our imaginations, ha ha - this picture abandons the household finance fixation that was the most frightening aspect of the first picture!

Candy Clark from The Blob plays Baxter’s partner at the magazine, who, after having a spooky encounter at the house and taking strange pictures of the realtor (played by John Harkins from Six Weeks) which make him look even more yoplait-faced than he really is, renounces her skepticism of the supernatural, does some investigating, and eventually comes to a remarkably sticky end while sitting in her car! Lori Laughlin of Secret Admirer and of recent news stories, is Baxter’s teenage daughter, who, along with a feisty friend played by Meg Ryan from Innerspace, D.O.A., and Armed and Dangerous, continually hangs out at the house against the wishes of Tess Harper from Flashpoint, essaying the role of Baxter’s angry ex-wife!

Robert Joy from The Dark Half and Land of the Dead is Baxter’s scientist friend, and he too comes to a bad end when a goochy demon monster reaches out of a bubbling water pit and grabs his face! Ha ha, there’s quite a body count in this picture, in fact - characters you don’t expect to become victims of the baneful dwelling are cut down as wheat before the harvester! Then one of Joy’s research assistants is blasted halfway out a widow by a door - ha ha, yes, you read that right! And all of this was filmed in 3-D, so of course there are many, many instances of items being thrust toward the lens, which will tend to confuse the viewer unaware of the movie’s tri-dimensional provenance!

Any affrights the movie has to offer come from the inherently spooky shots of the house, and even these are not as spooky as they are in the earlier pictures! (It’s still scarier than Amityville 1992: It’s About Time, though, ha ha!) It was directed by an old pro, Richard Fleischer, but he doesn’t seem to have had much interest in the goings-on! There’s an elevator scene, for example, that any truly engaged filmmaker would have excised at the script stage! Oh well - maybe Dino De Laurentiis made him keep it in, saying something like “Everybody heart stop when elevator drop! Everyone surprise when elevator rise!” I give Amityville 3-D one and a half smiling swordfishes, and that extra half a swordfish is really for the rainstorm that drenched me those many years ago! Ha ha!