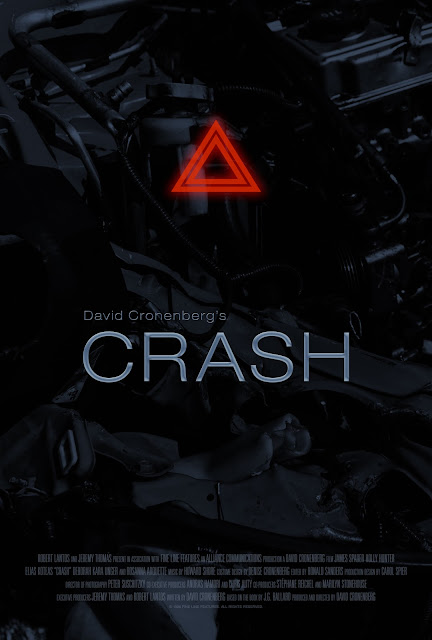 Beep beep, it’s Burl, here to review a car-crash picture! But it’s sure not one of your hayseed yee-haw skid-out epics like Redneck County or Smokey Bites the Dust, ha ha no sir! If those movies have a polar opposite, David Cronenberg’s chrome-blue, super-citified, anti-action drama Crash is it!
Videodrome is good and weird, but I think Crash was Cronenberg’s first real return to experimental filmmaking since the early half-features Stereo and Crimes of the Future! So for that reason I think it’s a noteworthy work, and of course it’s a serious-minded sex picture with more than sex on its mind, and also tremendously funny! I’ve been watching Cronenberg pictures for a long time, and have loved them over the years on different, highly varied plains, receiving renewed doses of satisfaction from them multiple times for each different genre cloak in which they appear to me! First, horror or science fiction movies! Then Important Cultural Artifacts! After that, perfectly crafted cult pictures! And finally, and I think ultimately, comedies! Cronenberg has claimed it himself, ha ha!
Not only is Crash based on a J.G. Ballard book, but the lead character, played by James Spader from Team-Mates, Tuff Turf, and Pretty in Pink, is named James Ballard! He’s married to Deborah Kara Unger from The Game, and both of them are so jaded by their high-rise Toronto lives that they play games of bohankie with whomever they come across in their daily lives, be they strange men in airplane hangars or simple, sexy camera assistants! Ha ha! But one night a distracted Spader loses control of his auto and runs into a car containing Holly Hunter from The Burning and also her husband! The husband is killed and Hunter injured, and she and Ballard end up recuperating in the very same hospital! They meet a local car-crash enthusiast named Vaughan, played marvelously by Elias Koteas from Some Kind of Wonderful, and become enmeshed in a strange subculture of people obsessed by the remaking by car crash of both the human body and human culture!
Rosanna Arquette from After Hours and Nowhere to Run appears in a small role as one of these subcultists, but she doesn’t have much to do except show off her leg braces and scars, accrued from the many crashes her character has endured! Meanwhile, Vaughan and his cohorts restage famous crack-ups, notably the one between James Dean and Donald Turnipseed! Meanwhile again there is lots of, ha ha, autoerotica going on, with all the characters having car sex with each other, and even old Vaughan catching a bummy at one point! But things take a turn for the alarming, and Spader and his wife are finally consumed by the fender-bending obsession!
This picture worked its automotive magic on me when I saw it in its big-screen run! I think I saw it at some kind of preview screening, and when I came driving up from the parking garage after the show, it seemed to me, as it had to the characters after their near-fatal freeway accidents, that there was now at least three times as much traffic on the road and that a collision was surely imminent! Even if this doesn’t happen to you, you’ll surely be caught up in the strange, defiantly unique atmosphere the movie induces! Ha ha! Some might call it goofball, but I think the movie knows more than its critics do, and I count it as a real accomplishment - perhaps one of Cronenberg’s finest! I give Crash three and a half hood ornaments!