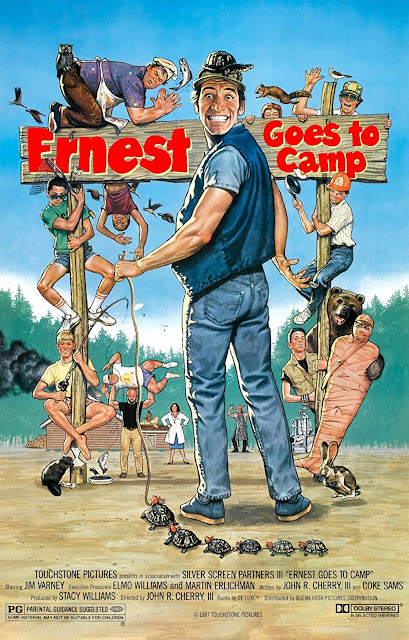 Ha ha, hello and howdy everybody, do you know what I mean? Yes, it’s Burl, here to review a strange star vehicle from days gone by: a feature film presenting a character who wormed his way into the public consciousness by appearing in a string of commercials in which he speaks to his invisible pal Vern! Ha ha, yes, I’m talking about Ernest, and more specifically about his feature film debut, Ernest Goes to Camp!

Strangely enough I saw this movie in the theatre, and I’ll take a brief digression to tell you why! Ha ha, it was June of 1987, and I was excited to see a new movie that was coming out that summer! I heard about a sneak preview one night, and so my pal Doug and I hurried down to the mall multiplex! In their wisdom, the theatre chain decided to pair this new movie with something they figured would go well with it, Ernest Goes to Camp! When the Ernest picture ended and the sneak preview began, you could hardly hear the sound of the movie over the din of parents rushing their children out of the theatre: for the movie was Full Metal Jacket! (Ha ha, one intrepid dad stuck it out to the end with his two young kids, though!)

So ever since then, those two movies have been inextricably connected in my mind! Watching it again, I realized there were other connections too! Both pictures have predominantly male casts, feature an incompetent who’s bad at everything but shapes up in the end, are set largely in barracks-like environments, employ actors who later participated in the Toy Story series, and climax in scenes of frenzied battle! After a preview setting up the Indigenous legend that’s the backdrop for the titular camp (and which the picture treats with surprising restraint and, by its lights, respect), we meet the halfwit camp handyman, Ernest, played as ever by Jim Varney! Varney of course is also known as the voice of the slinky dog in Toy Story!

Victoria Racimo from Prophecy is the camp’s serious-minded nurse, whom the picture never successfully turns into an object of the neutered Ernest’s romantic interest! Her grandfather is played by famous Italian actor Iron Eyes Cody, well known for his redface roles in Son of Paleface and hundreds of other movies and TV shows; his character, it seems, owns the land the camp is on! Ernest, whose dream it is to one day become a real camp councilor, is put in charge of minding a group of alleged delinquents after these scrubbed-clean teens manage to shatter the leg of their original councilor! Scenes of Ernest trying to make friends with the delinquents are intercut with vignettes involving camp chef Gailard Sartain (whom we know from All of Me and many an Alan Rudolph picture) and his gross food-flinging machine, and scenes of bad guy John Vernon, well known from Sweet Movie, Curtains, Crunch, and Herbie Goes Bananas, doing his bad guy thing without putting too much effort into it!

Vernon’s character owns a strip-mining company that wants to take over and destroy the land, and of course Ernest moronically manages to help Vernon bamboozle the camp away from its rightful caretaker, Iron Eyes Cody! In a showdown punchup with a beefy mining foreman played by Lyle Alzado from Tapeheads, Ernest is brutally beaten and ends up face down in the dirt, bleeding, and is scorned and abandoned by his charges, except of course the little boy who always liked him! This savage pounding, along with a dim awareness of the profound ramifications of his idiocy cause Ernest’s canoe smile to finally fade, and that night he sings a heart-rending ballad of infinite sadness to his turtle in which he expresses gratitude for the falling rain, as it will hide the tears streaming down his bruised and battered face! Ha ha, pretty grim!

The picture has a few bright moments, and Ernest is not wholly without good-natured charm; and the climax involves a sudden turn into the supernatural, which is a trope I usually like! The picture was a little better than I remembered it (actually, I didn’t remember it at all, other than as a way of marking time before the start of the Kubrick movie), but not much, and I was expecting it to be absolutely bottom-of-the-barrel! It wasn’t that, but it hovered not too far above, and so I give Ernest Goes to Camp one and a half turtle parachutes!