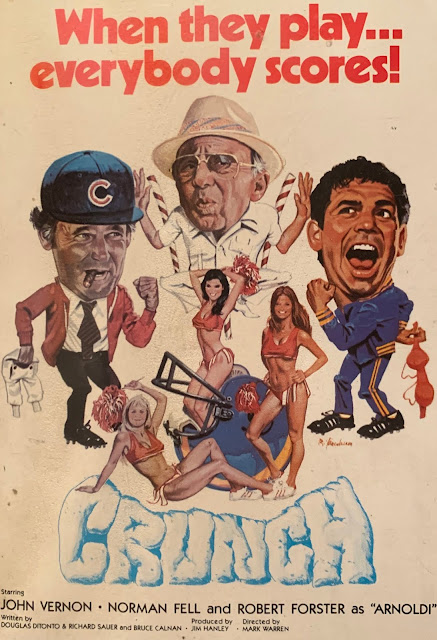 43, 27, 62, hut hut hut, it’s Burl, here to review an old-fashioned teen sex comedy which features plenty of football! Ha ha, this is a picture that sits right at the junction between the 1970s cheerleader pictures like The Pom Pom Girls and the 1980s antecedents like Porky’s! It’s perhaps best known under the ludicrous title The Kinky Coaches and the Pom Pom Pussycats, and also gets called Heartbreak High for no particular reason, but the title it was made under, which was also the title of the version I saw, is simply Crunch!

I guess that title refers to the clashing of football lines, because there’s quite a bit of that particular sport in this picture! The funny thing is, despite being a study of two rival schools for whom football glory means everything, which is a state of mind we associate uniquely with the United States, and indeed being explicitly set in the States, though the specific state or town is left unnamed, this is in fact a Canadian picture! It therefore has a strangely ersatz quality, a feeling of community playacting, and in no scene is this more apparent than late in the movie when the football teams are supposed to be singing the Star Spangled Banner and it’s obvious that nobody on screen knows the words! Ha ha!

Inasmuch as there exists a narrative, it concerns the football rivalry between the City High Moose (no doubt a typical American team name, ha ha!) and the Johnson High Eagles! The Moose are coached by a deep-voiced hard case called Bulldog, played by John Vernon from Sweet Movie and Curtains and Fraternity Vacation, who has a pathological attachment to a pair of long johns he feels he must wear for his team to win! Coaching the Eagles is the considerably more easy-going Arnoldi, essayed by Robert Forster from Alligator, The Banker, and The Descendants! Meanwhile a sportscaster played by Norman Fell from Bullitt, The Graduate, and Catch-22 prowls around trying to get interviews with the coaches about the big upcoming game!

We get to know some of the students on both of the teams, and none of them are particularly likeable! The Eagles’ star quarterback and general BMOC is Gary Leonard, played by Kimberly McKeever from Scanners and Visiting Hours, and he’s one of those possessive, inconstant boyfriends, who tries to get his girlfriend to forget about her causes and just play bohankie with him! His Moose counterpart and personal rival is Plitt, played by Thom Haverstock from Hog Wild and Terror Train, an oily creep who pretends to care about causes in a bid to make sweet love to Gary’s girlfriend! Anthony Sherwood from City on Fire and Wild Thing is in there, and there’s a gross guy called Pigger who snorts and oinks a lot, and sits down so hard on a cream pie that the entire Eagles team is covered in futz!

There are pranks and inter-team one-upmanships, and the Eagles successfully steal Coach Bulldog’s precious long johns! There’s a crazy sports-themed sex scene involving Forster going practically crazy with lust, and a game of strip-poker held in a boogie van that simultaneously recalls many moments in the Crown International filmography while predicting others in the rush of 80s teen sex comedies to come! In the middle of it all there’s a rather sweet-natured scene in which Forster and Vernon, evidently upholding a longstanding tradition, share a pre-game drink and wish each other good luck on the gridiron!

It’s all pretty lackluster, though! Fell gives a grimly un-Roperish performance as the sportscaster, which leads one to wonder why he’s there at all! The direction is artless and the humour pretty muted, and the climactic football game seems to go on forever! Ha ha, football’s a pretty boring game to watch on screen, I always find - even the game in M*A*S*H gets a little tedious! I won’t say I didn’t enjoy parts of Crunch, because I did; but in the end, I can’t give it more than one unicycle-riding chicken!