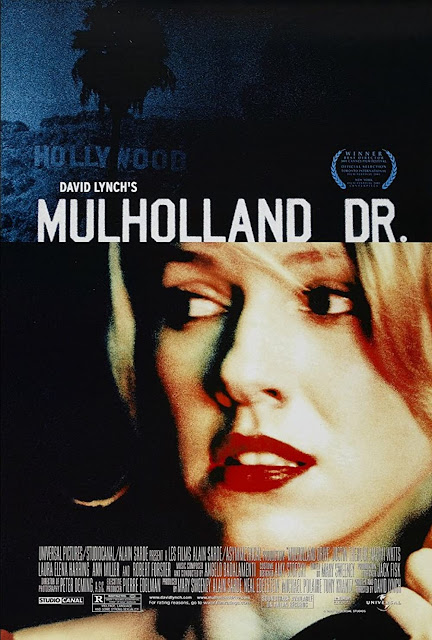 Attention malingerers, it’s Burl, here with a review of a fine example of Lynchiana! In fact it might be one of the Lynchiest films he ever made, and that’s saying a lot! Of course the picture I’m speaking of is not Dune, but Mulholland Drive, which I remember seeing in a cavernous old Vancouver movie palace nearly on my own in the cinema, which itself was a somewhat Lynchian experience, ha ha! Plus I went to school with a guy named David Lynch, and while that has nothing to do with anything, I thought I’d mention it!

So I hear you asking “Ha ha, Burl, what’s this movie about?” Whoa, bear, not so fast! Well, after all, it’s a dream, and me explaining the story to you will sound a bit like I’m telling you one of my own dreams! It can be boring and even annoying to hear about someone else’s dream, and I think there are some who take this movie, or any mildly challenging oneiric work, in that negative spirit! Ha ha, not me though! I love a good dream movie, and this is one!

There’s a car crash on Mulholland Drive in the hills above Hollywood, and a lady, pretty but mindstunned, and played by Laura Harring from Silent Night, Deadly Night III and The Forbidden Dance, stumbles out of the wreck! She sneaks into a house and falls asleep, and the next day Betty, played by Naomi Watts from Matinee and The Ring, arrives in Los Angeles straight from Deep River, Ontario, all bright smiles and big eyes, and in the company of an elderly couple she met on the plane! She’s staying at the home of her absent aunt, which of course is the house the car crash woman is squatting in, and is part of a Hollywood complex managed by Ann Miller from On the Town! Spying a poster for Gilda, the amnesiac woman calls herself Rita, and together Rita and Betty set out to discover Rita’s true identity!

Meanwhile, as a squad of cops that includes Robert Forster from Alligator investigate the Mulholland car crash, Justin Theroux from Miami Vice is trying to direct a movie! He's receiving cryptic casting offers he can't refuse from a pair of gangsters, the Castigliane Brothers, who are played by the film’s composer, Angelo Badalamenti, and that fine old fishface Dan Hedaya, well known from Endangered Species, Buckaroo Banzai, Tightrope, Commando, and so many others! Also meanwhile, Mark Pellegrino from Bad Meat plays an imbecilic hit man who must shoot everyone who sees him, and of course there’s the vignette with the two guys and the horror-hobo behind Winkie’s!

Meanwhile meanwhile, Betty gets a chance to do her big audition! In the office of movie executive James Karen, whom we know from Time Walker, Betty plays a scene with a leathery Troy McClure-type star played by leathery Troy McClure-type Chad Everett from The Intruder Within! Ha ha, she really gives ‘er and wows everyone in the room, including an agency rep played by Lee Grant from Damien: Omen II! And indeed it is an electrifying scene, something you might expect to happen in a naïf’s aspirational dream of Hollywood!

And then at a certain point everything changes, and characters you thought were one thing turn out to be another, and a movie you figured for a neo-noir is so far around the genre wheel that it’s almost a neo-nor again; and then Rebekah Del Rio busts out an amazing performance of Roy Orbison’s Crying, but in Spanish, and the old laughing people come crawling out like bugs, and you say to yourself ha ha, this is weird! But it’s a dream! all a dream of Hollywood, and thus a dream about a dream factory that was inspired by the dream factory itself, and so where does cinema end and dream begin, and is there a line of demarcation, however fuzzy, and why need there be anyway? And let us embrace mystery for once, and all together we'll cry "Ha ha!"

Sometimes in a movie I might be totally out to lunch as to what’s going on, but within my haze of confusion I suddenly recognize that the story has come to its proper end and I think boy oh boy, if the movie ends right now that would be just perfect… and then, what do you know, it ends! That has happened now and again - Irma Vep is one example - and that’s what happened with Mulholland Drive! Let’s call it Unexpected Perfect Ending Syndrome! It’s one of my favourite things a movie can do, and accordingly I give Mulholland Drive four dumpsters!