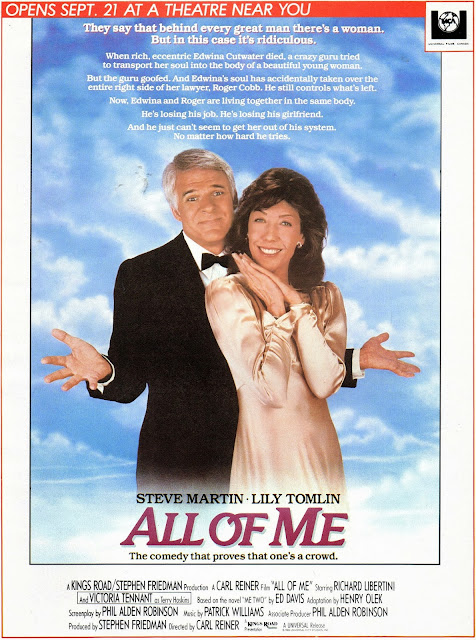 Hi, Burl here to review another picture starring that wild and crazy fellow, Steve Martin! Ha ha, the picture’s called All of Me, and along with The Lonely Guy, it marked a change in Martin’s acting style from “completely wacky” to “slightly less wacky!” Ha ha!
We of course know Steve Martin from his performances in ¡The Three Amigos! and Looney Tunes: Back in Action, and here he plays Roger Cobb, a lawyer and sometime jazz guitarist! He’s got one of those fiancées who is so clearly not the person he should be marrying that it almost seems unfair to both the character and the actress to have put her in that position! Roger has to go out to see millionairess Edwina Cutwater, at whose mansion a nutty deathwatch is taking place! Edwina, played of course by Lily Tomlin, is about to kick off, and she has a Tibetian ceremony prepared that will transfer her soul into the body of a young, healthy lady! Ha ha, in other words, she seeks to gain The First Power!
Through rambunctious circumstances, Edwina’s soul ends up in Roger Cobb, and the rest of the movie has clever if repetitive physical comedy from Martin as he battles for domination of his own body! Also, ha ha, sometimes he has to p*e! And then, finally, when we realize that the young lady is an evil opportunist, shenanigans must be engaged in to set things aright! Just about all the loose ends are tied up in a too-neat bundle!
I admired how low-key all the supernatural stuff is in this movie! All the soul transferring scenes are just people standing around a little bowl – there are no blue optical effects or lightening flashes! Ha ha, if the movie was made today (and there’s talk of a remake, I believe!), you’d certainly be hit over the head with a bunch of flashy trick effects that would do nothing more than slow the action down to a crawl! But the only trick effects in this picture are little mirror gags, whereby Edwina appears in any reflective surface Roger looks into! A little like Poltergeist III, actually!
There’s a pretty solid journeyman cast haunting the fringes of the picture, like Dana Elcar as the law office boss, Richard “Fletch” Libertini as the guru (a casting strategy I can’t see going over well today, ha ha!) and the gravel-voiced lady as Roger’s humourous secretary! And of course Roger owns a shaggy dog to show his eccentricities, and his best friend is a blind jazzbo played by Jason “No Way Out” Donovan, who also briefly becomes possessed by Edwina!
Altogether this is a competent little film, sprinkled with a few laughs here and there, but ultimately forgettable! Roger’s desire to crusade for the underdog against the rich is an refreshing sentiment to hear voiced in a Reag*n-era picture, and just as refreshing was the movie’s utter lack of interest in depicting how legal offices, trials and processes work! Ha ha, no Grishaming here! But as I say, there’s not much to hang onto about this picture – general competence is not terribly memorable or exciting! So I give All of Me two green buckets, and back it goes on my VHS shelf likely never to emerge again!
Posted by Burl at 11:20