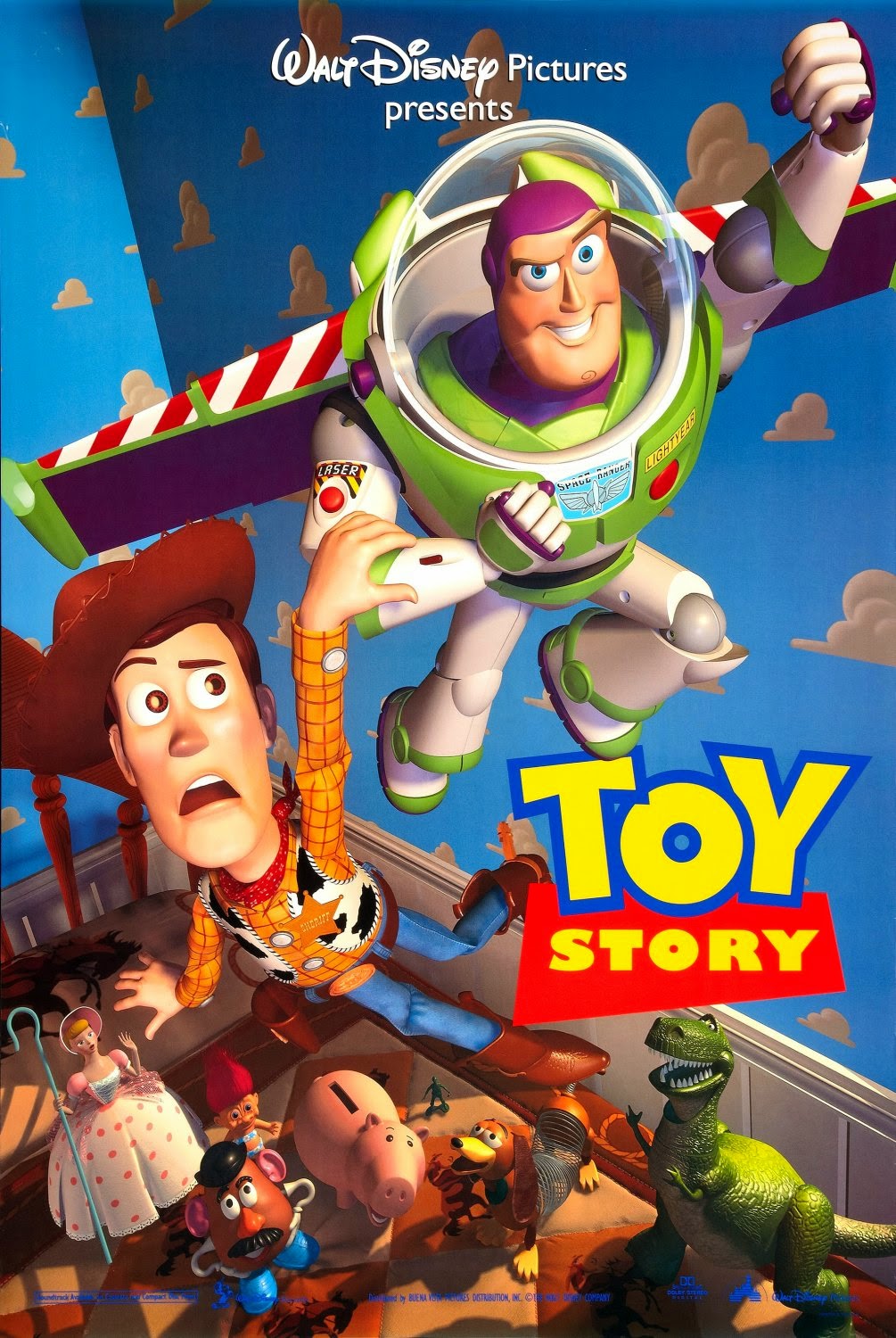 A good day to you! Ha ha, it’s Burl here to review an animated picture from… what? Almost twenty years back? Why, how time does fly! Ha ha, I still think of Toy Story as a new picture, I guess, because it fits in so well with all the many computer animated movies that have been made steadily ever since!
Now, I’ll tell you right off the bat that I’ve never seen any of these pictures! Ha ha, the most recently-made animated feature film I’ve seen is Beauty and the Beast, which I saw in the theater with a ladyfri*nd way back in 1991! I guess all these years I figured they were mainly films for kids, and that I would one day have a kid of my own with whom I could watch them! And now that’s the case, ha ha!
So until yesterday, I’d never seen Toy Story, and now I have! “Ha ha, what did you think of it, Burl?” you’re probably saying to your computer screen right now! Well, I thought it was pretty amusing! It was fast-paced and funny, just as I was expecting it to be!
Tom Hanks, famed from his appearance in The Money Pit, stars as Woody, a talking-cowboy doll which bears no resemblance to any actual toy I’ve ever heard of! He’s the de facto leader of the playthings in Andy’s room, but his benevolent rule, and his status as Andy’s Favourite, are threatened when the lad receives a Buzz Lightyear for his birthday present! There’s acrimony in toyland, and the two rivals must undertake a harrowing journey through a space-themed pizza restaurant and the home of a sadistic child, and not miss the moving van that will soon take everybody to a new home! Each must deal with his own troubles along the way: Buzz has to realizeand then deal with the realization that he’s not a real space ranger but only a child’s amuse-bon; while Woody must address his tendency toward mild unctuousness!
The movie is a trifle, but an enjoyable one! The voice casting is marvelous: Tim Allen, who is probably best known for his headlining appearance in What Do You Say To A Naked Lady?, sounds remarkably like Mel Gibson in his role as Buzz! Wallace Shawn from My Dinner With André plays a meek dinosaur; John Ratzenberger, known principally for his role in Protocol, is an officious pig; Annie Potts of Ghostbusters is a sexy Bo Peep; R. Lee Ermey of Full Metal Jacket is, of course, the leader of a platoon of army men; and Laurie Metcalf of Uncle Buck is Andy’s mom!
Little details delight the semi-alert viewer throughout, like the Alien-themed bop-em at the pizza place, or the fact that Andy’s house is being sold by Virtual Realty, or the mix-n-matched mutant toys led by a crab-legged confabulation that could only have been inspired by The Thing! I suppose the computer animation must look pretty crude to purveyors of todays cartoonshows, but it looked okay to me! I think I was right to start my journey into feature-length computer animation with the first one of them made!
There wasn’t much work done on the details of how life as a toy really works, though a set of capital-R Rules is alluded to at one point! Nor were they much concerned with providing any internal logic to the fancy! But ha ha, none of this bothered ol’ Burl! I guess I should watch the sequels, and maybe that has more of that business, if I ever do get curious about it! At any rate, it’s an inoffensive and fast-paced amusement, and I give it two and a half tributes to Gary Larson!
Posted by Burl at 22:47