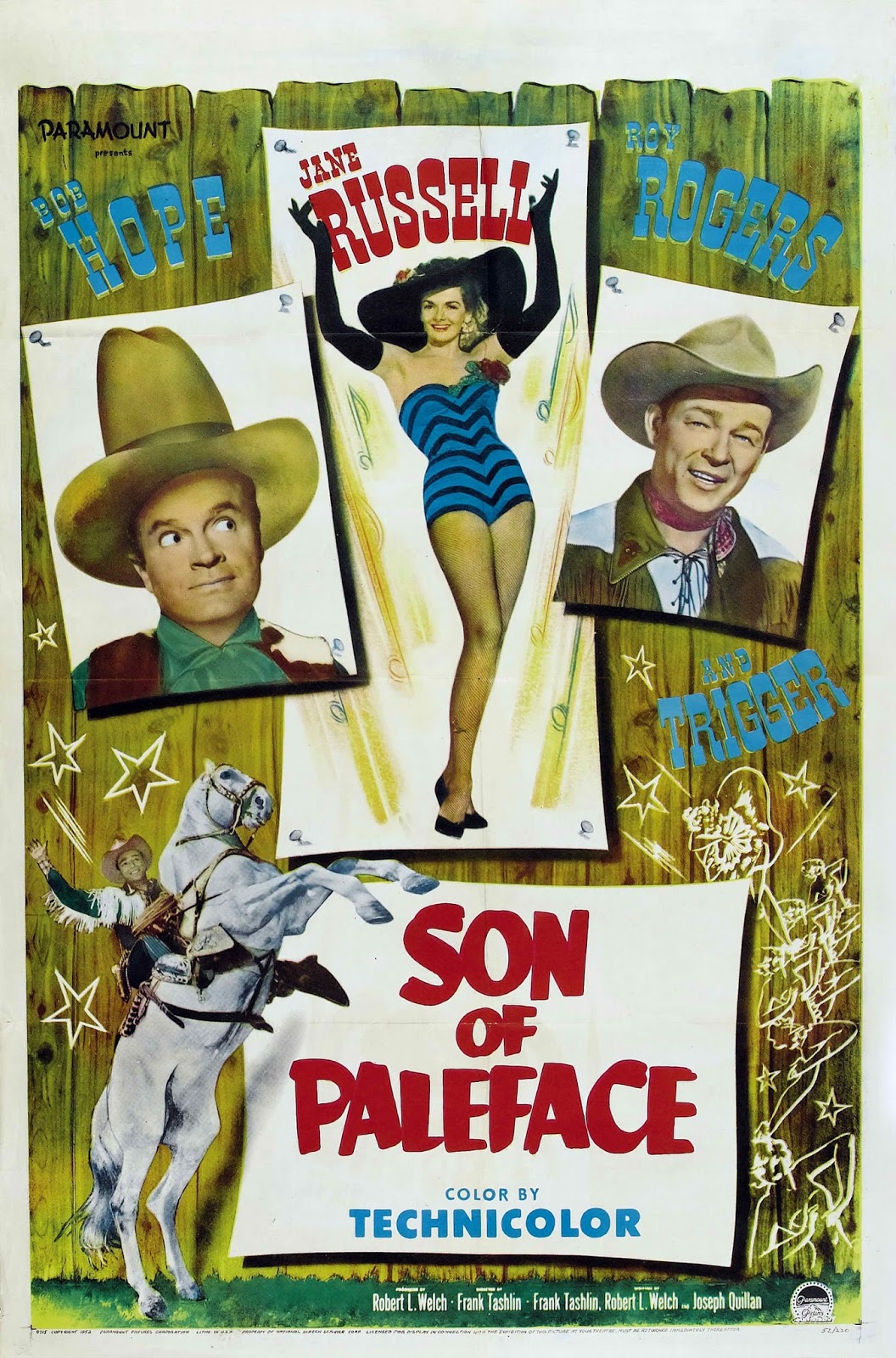 Git along cowpokes, it’s Burl here! Ha ha, yes, I have another oater to declaim on for you today! Yes, it’s a comedy oater, featuring the old ski-slope nose himself, Bob Hope, whom we all know from his golfing cameo in Spies Like Us, ha ha! The picture is the sequel to The Paleface, which I’ve never seen, and it’s called Son of Paleface!
Now, I couldn’t tell you what went on in The Paleface, though there are clues salted throughout this sequel! Frankly it doesn’t seem to matter much, as this is a Frank Tashlin picture, so what it’s mainly concerned with is crazy absurdist cartoon humour! And of that, believe me, there is plenty!
Hope of course plays the titular offspring, Peter Potter Jr., a Harvard manchild who travels West in his flivver to pick up the fortune allegedly left to him by his blackguard of a father! But when the trunk supposed to contain the gold proves empty, Potter must pretend to be rich anyway, because otherwise the townsfolk of this Old West burg will tear him limb from limb, so eager are they to have all the debts left by Potter pére repaid! Ha ha!
In the meantime, the town is being plagued by robberies! Someone nicknamed “The Torch” is ransacking buggies and then retreating to a fabulous lair hidden beneath a covered bridge; and the culprit turns out to be the inexplicably-named “Mike,” a saloonkeeper and, ha ha, torch singer played by the incomparable Jane Russell! Hot on her trail are two faces familiar from such pictures as Susanna Pass, namely Roy Rogers and Trigger, the Smartest Horse in Movies!
All of this is a framework for songs, a little romance, some action and, more than anything else a rapid-fire selection of jokes and tomfoolery! Things frequently get strange, as when Potter drives his car through a desert, picks up a pair of buzzards who perch on the back, then drives through a so-called mirage of people ice-skating, then finds the buzzards on his car have transmorphed into penguins! And that’s just a taste of the oddballitry!
Trigger again proves worthy of his oats by performing some amazing tricks! At one point he and Hope share a bed, and the chilly horse repeatedly pulls the blankets up over himself! Ha ha, I hope he got a nice carrot or a sugar cube after that one! And I also want to mention the amusing cameos, like Bing Crosby appearing as a nameless “old character actor on the Paramount lot we try to keep working,” and the director of Madame Satan himself, Cecil B. DeMille, appearing as a photographer!
Ha ha, this movie made me say “ha ha” a number of times, and frankly I wasn’t expecting it to! So many of the gags are so outlandish that the movie approaches Hellzapoppin’ territory, and it’s all very colourful and bubbly and marvelous! Hope is funny, and Roy is very straight ahead, except that he prefers horses to ladies! Ha ha! I’m going to give Son of Paleface a rousing three donkey hats!
Posted by Burl at 16:45