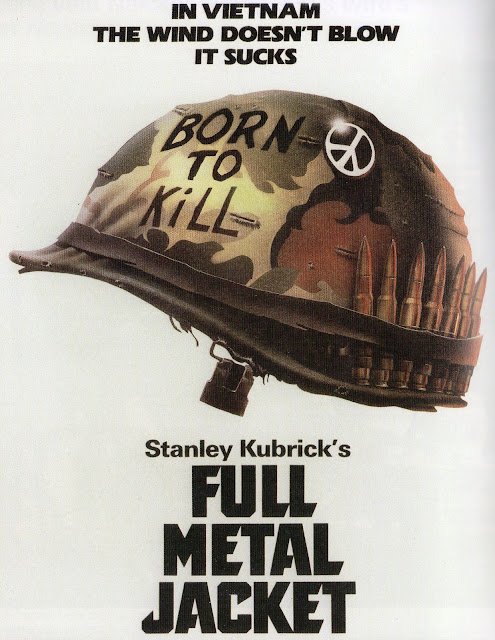 Hi, it’s Burl here, standing tall before the man! Today I want to talk about Stanley Kubrick’s Vietnam movie Full Metal Jacket, which is a dilly of a picture! Kubrick had made war pictures before this, most notably Paths of Glory, and when you factor in films like Spartacus and Dr. Strangelove you get a pretty good idea of how the man felt about armed, organized human conflict! He thought it was ridiculous, ha ha!
Full Metal Jacket almost plays as a comedy at times! The bandy-legged, leather-bound drill instructor, Sgt. Hartmann, is so outrageously over the top that I think if I was one of the maggots under his tutelage, I’d have reacted to his rants like Private Pyle does, with a hard-to-conceal smirk! Ha ha, I’d have certainly received a punching or two from that beef-jerky of a DI!
Allow me to digress for a moment! Ha ha, I saw a special advance preview screening of this movie back when it was released in 1987, and I was so excited to see the movie that I got there early so I could catch the regular feature that had been double-billed with this one! This was in the days before the Internet, remember, so most everyday people had no idea the movie was coming, or what it was about, or anything! And maybe that’s why the theatre people decided that Full Metal Jacket should be paired up with none other than Ernest Goes to Camp! Ha ha, the theatre was full of families who were there to see the big-screen debut of Ernest, and who liked the idea of seeing a second mystery film for free!
You could sense the confusion from the audience as the seemingly endless shots of the recruits getting their heads shaved went on and on! They’d been primed to laugh by Ernest’s antics, so there was plenty of tittering, and more once Sgt. Hartmann started his profane bellowing! Ha ha, he was always threatening to poop on people’s necks, that crazy Sgt.! But one by one, as his threats and insults became more graphic, and the atmosphere chillier and less recognizably human, the families began to drift away! All except one devoted dad and his two eight-to-ten year olds! They stayed for the whole show, and I often wonder how he and the kids described their evening at the pictures to Mom later on!
This movie was a part of the great Vietnam Surge of the late 1980s, and initially I thought Platoon was the better movie! Platoon is hardly a bad picture, but, for me anyway, it’s become apparent that it’s more just an exercise in surface impact, and has less thematic follow-through than the Kubrick picture! There’s a generic feel to all the jungle creeping and yelling of Platoon, whereas Full Metal Jacket is and always will be its own unique thing!
A few random thoughts: The whole cast is great, but Dorian Harewood is especially good in the picture! He plays Eightball, and I thought he did a standout job! Also, that Colonel who shows up, the one who asks of his soldiers only that they obey his every command as they would the word of God, is Bruce Boa, the Waldorf Salad guy from Fawlty Towers! And whatever happened to Douglas Milsome, the cinematographer? He did a great job, and you’d think he’d have been set for a career shooting prestige pictures after this one! But the next thing you know he’s photographing killer Rumplestiltskin movies and Jean-Claude Van Damme direct-to-video cheapies! Weird!
Anyway, this is a singular picture and an extremely entertaining one! It’s brutal and funny, and even though you’re always conscious that it was shot on a backlot in England and they never went anywhere near either Parris Island or Vietnam, it has a thematic and emotional effect that bonks most other Vietnam pictures over the head! I give it four reach-arounds!
Posted by Burl at 17:09