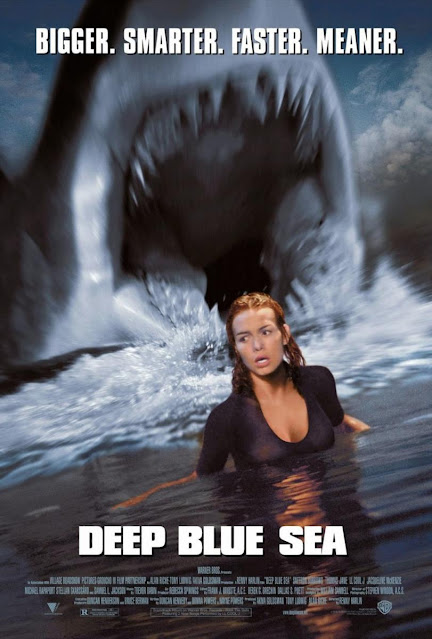 Blub blub it’s Burl, here with more underwater action-horror for you! As you may recall, I have a fondness for such photoplays: the soggybottoms of 1989, for instance, like Deep Star Six and Leviathan and The Abyss! Movies that aren’t necessarily set at underwater complexes but feature water monsters are pretty good too, and the picture under review today, Deep Blue Sea, attempts to combine the charms of two such pictures, Jaws and Deep Rising! Ha ha, I’m surprised they didn’t call it Deep Jaws! And now I hear you asking: well Burl, did they succeed in grafting these two water movies into one satisfying cinematic concoction? Read on, MacDuck!

From Deep Rising they took the 90s-era digital monster effects, a little bit of tomato paste, a lot of goofy dialogue, a gang of non-characters, a big storm, and the word “deep!” From Jaws they took sharks! All of this is set at an underwater installation that differs from the above-named 1989 pictures in that it’s not at the bottom of the sea, but rather some small distance below the surface, with much of it floating like an artificial island! We explore this facility in the company of Mr. Samuel L. Jackson, known from such movies as Exorcist III and Die Hard With A Vengeance, who plays Russell Franklin, the millionairesman who funded the project!

Thomas Jane is a surly diver called Carter and Saffron Burrows is Dr. Susan; and other characters are played by Jacqueline McKenzie from Malignant, Michael Rapaport from Metro, LL Cool J from Halloween H2O (as “Preacher,” cook, parrot owner, and man of God), and of course Stellan Skarsgård from The Hunt for Red October and Dune Part One as The Doc! Their goal? Make sea sharks smart as a way of somehow curing Alzheimer’s! (Ha ha, strangely they ignore the fact that they already have an animal aboard their station that can talk, which is Preacher’s foul-mouthed parrot, so why not test on him!)

Ha ha, it’s a noble goal, but when the inevitable storm comes and wreaks havoc, and the topside portion of the facility is destroyed and the supersmart sea sharks released from their pen, the characters are left wishing maybe they hadn’t poked so much at the bitey fish! Ha ha, naturally the sea sharks want revenge, and they take it out mostly on The Doc, who gets his arm chomped off for starters, then when they’re trying to helicopter him out of there, a shark nabs him off the end of the cable, carries him around a bit underwater, then uses him as a battering ram to get through an underwater window! Oh, poor Doc!

But his hilarious death scene is not the most notable or memorable in the picture - ha ha, that honor of course goes to Samuel L. Jackson, and while since that time there have been many copycat sudden-death scenes to dilute the impact of this one, it still remains amusing, and I can assure you that it was a real gudukus in the theater back when it was new!

When I watched the picture again recently, of course the moment was not so incredible, and while one can’t blame the movie for that, one can blame it for the terrible script, the wafer-thin characterizations, the relentless borrowing from other, better pictures, and the lack of affrights! It’s one of those pictures that takes a while to get going, but once it does, it stays going, so it’s got that going for it! And it does have some moments sprinkled here and there - not many, ha ha, but some! So in the end, when all the bubbles have risen to the surface, I give Deep Blue Sea one and a half parrot-munchings!